The Truth about Energy, Global Warming, and Climate Change: Exposing Climate Lies in an Age of Disinformation (Hardcover) 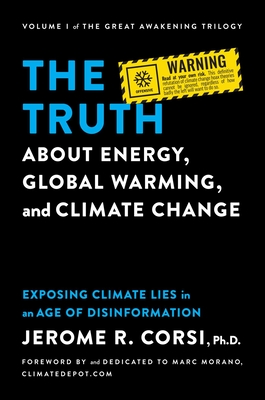 The Truth about Energy, Global Warming, and Climate Change: Exposing Climate Lies in an Age of Disinformation (Hardcover)


Difficult to Find
As Seen On C-SPAN’s Book TV

This book exposes the truth that the climate change hoax is a political movement aimed at eliminating capitalism by spreading alarming disinformation that in order to “save the Earth” from global warming, we must reduce carbon dioxide emissions by switching from hydrocarbon fuels to renewable energies.

The Truth about Energy, Global Warming, and Climate Change: Exposing Climate Lies in an Age of Disinformation reveals a science-based understanding of Earth’s climate and temperature that Green New Deal proponents are trying to hide. In the pages of this book, you will see scientifically documented evidence for many facts that the radical left denies.

Want to know the truth about how energy, temperature, and climate work? Read The Truth about Energy, Global Warming, and Climate Change—but prepare to be shocked. Jerome R. Corsi has conducted a tour-de-force examination of peer-reviewed climate science that exposes the neo-Marxists behind today’s anti-capitalist global warming hoax.
Since 2004, Jerome R. Corsi has published twenty-five books on economics, history, and politics, including six New York Times bestsellers, two at #1. He co-authored his first #1 NYT bestseller in 2004 with John O’Neill: Unfit for Command: Swift Boat Veterans Speak out Against John Kerry. Dr. Corsi authored his second #1 NYT bestseller in 2008: The Obama Nation: Leftist Politics and the Cult of Personality. From 2004–2016, Dr. Corsi was a senior editor at WorldNetDaily.com, where he authored hundreds of articles.

In 2019, the Mueller investigation targeted him for prosecution for “lying” to federal authorities in the Russian collusion investigation. Dr. Corsi refused a plea agreement, and the Mueller prosecutors declined prosecution. His 2018 book Killing the Deep State: The Fight to Save President Trump was on the New York Times bestseller list for several weeks. He authored two books on the Trump administration and his experience with the Mueller prosecutors: Silent No More: How I Became a Political Prisoner of Mueller’s “Witch Hunt” (2019) and Coup d’État: Exposing Deep State Treason and the Plan to Re-Elect President Trump (2020).

The Truth about Energy, Global Warming, and Climate Change: Exposing Climate Lies in an Age of Disinformation will be his third book on energy, climate change, and global warming. His first book on this subject was Black Gold Stranglehold: The Myth of Scarcity and the Politics of Oil (2005), co-authored with Craig R. Smith. In that book, Dr. Corsi correctly predicted that oil would hit one hundred dollars a barrel when oil industry experts thought a price that high would never happen. His second book was The Great Oil Conspiracy: How the US Government Hid the Nazi Discovery of Abiotic Oil from the American People (2012). That book was the first in which Dr. Corsi argued that German chemists in the Weimar Republic formulated the chemical equations describing how abiogenic hydrocarbons are created in the mantle of the Earth.

Currently, Dr. Corsi is working to assist his wife, Monica, the founder of Corstet LLC, and her new website https://corstet.com. Dr. Corsi has retired from active involvement in current politics to devote full-time to writing books. He resides with his family in New Jersey.
“Corsi’s new book is a trove of information, especially about the people and motives that have driven the current climate frenzy. The discussion of climate science, especially the dominant role of the sun and clouds, is very good. There are also fascinating discussions of unfashionable and perhaps incorrect scientific theories like abiogenic hydrocarbons or alternatives to plate tectonics. These help to clarify the all-too-human nature of science, and how hard it is initially to distinguish between a paradigm shift and a mistake, like today’s alarm over ‘carbon pollution.’”
— Dr. William Happer, professor emeritus in the Department of Physics, Princeton University; chair of the university research board, 1995–2005; winner of the Thomas Alva Edison Patent Award in 2000

“Corsi, a bestselling author of books about mainstream political issues, proved to be a powerful enough mind to brilliantly deconstruct a seemingly scientific topic, the fight against climate change. He sees the fear as wildly exaggerated. Sunspots, cosmic rays, and oceans as more important for the climate than carbon dioxide. The book is not afraid of delicate scholarly topics such as chaos theory, the chemistry of Earth's core, and the extinction of dinosaurs. But for Corsi, the movement is primarily a social phenomenon that arose through the integration and evolution of several left-wing factions and ideologies including Malthusians who neglect the human intellect. The tampering of the data by the favored researchers, failed green economic policies, limitations of electric cars and other hyped technologies, as well as natural processes such as the carbon cycle are described in a way that is as detailed and sourced as it is devastating. Corsi’s decision to dedicate the book to Marc Morano also proves his profound understanding of this vitally important ongoing conversation.”
— Dr. Luboš Motl, physicist, former faculty at Harvard University

“Corsi provides an eye-opening history of the contextual background for the hysteria accompanying climate change as well as descriptions of a wide range of thinking about the history of the planet—thinking that illustrates both the insights and fallibility of the scientific enterprise.”
— Dr. Richard S. Lindzen, professor emeritus of Atmospheric Sciences at the Massachusetts Institute of Technology; former Alfred P. Sloan Professor of Meteorology at the Massachusetts Institute of Technology

“Many books have been written on what I believe is a phony climate war. Dr. Corsi’s treatment of this situation with across-the-board irrefutable facts and impeccable sources is a primer on how to blow away any argument on this matter.  His attack seems to be on two fronts: 1) showing there is no emergency and then 2) exposing the why behind the what on the matter, the evil intentions of destroying the freedom of the individual. With twenty-five books under his belt and a man known for standing his ground when the truth is on his line, there is no better source to have than this book. I do not believe there is a climate war (it’s nature and not man in control), but I do believe there is a battle raging using climate and weather to take down our way of life. I can think of no better source to have in the trenches than Dr. Corsi and his book. In fact, let’s flip that around: I hope I am worthy to just be around someone like this as his writings and actions are light in a world filled with the darkness of non-truths.”
— Joe Bastardi, chief forecaster at WeatherBELL; author of The Climate Chronicles and The Weaponization of Weather in the Phony Climate War

“Corsi’s book is a must-read to discover just how unserious, inept, and over-certain proponents of global warming of doom are. Their ‘solutions,’ like battery-powered airplanes, ranging from comical to scandalous. None of them would do a thing to fix what doesn’t need to be fixed.”
— Dr. William M. Briggs, climate statistician who served on the American Meteorological Society’s Probability and Statistics Committee

“Corsi’s work is sorely needed, exposing the climate lies and disinformation in government, university, environmental and UN official reports, and the media. With a half-century of work on climate and weather attribution studies, I find as Jerome showed incontrovertible evidence that sunspots, cosmic rays, and short and longer term cycles in the oceans are far more important for the climate than carbon dioxide. The true dangers come from the remedies being pushed, not the natural cycles in weather and climate.”
— Joseph D’Aleo, certified consultant meteorologist; first director of meteorology at the Weather Channel and the former chairman of the American Meteorological Committee on Weather Analysis and Forecasting

“Corsi has achieved the almost impossible. He shows how partisan politics and incompetent climate science have combined to distort energy economics. He describes how different views about population, hydrocarbons, capitalism, and racism have complicated the use of truth in climate science and politics. He shows how nature, not our carbon dioxide, controls the Earth’s temperature. Corsi explains why we must think clearly in politics, science, and energy if we are to safeguard our economy, our freedom, and our lives.”
— Dr. Ed Berry, physicist and American Meteorological Society Certified Consulting Meteorologist