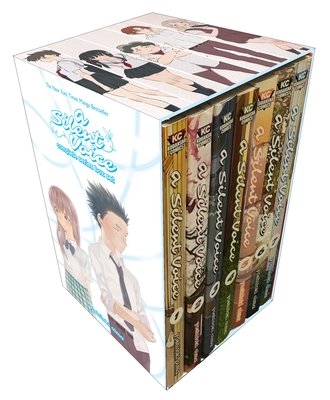 This is book number 8 in the A Silent Voice series.

The acclaimed, bestselling manga about a girl who can't hear and the boy who bullied her, from start to finish, in a premium, collectible box set. Includes all seven volumes, plus an exclusive, double-sided 10-by-15-inch poster and a replica of Shoko's communication notebook.


This emotional drama is one of the most critically-acclaimed manga of the decade, earning an Eisner nomination and accolades from teachers and the American Library Association. Years ago, Shoya Ishida led his peers in tormenting a hearing-impaired classmate, Shoko Nishimiya. When she transfers schools, Shoya finds he has gone from bully to bullied, and is left completely alone. Now Shoya struggles to redeem himself in Shoko's eyes and to face the classmates who turned on him. An animated film adaptation from Kyoto Animation has swept the globe, arriving in US theaters in October 2017.
"A Silent Voice isn’t just a potential conversation starter about bullying, it also teaches empathy and has the potential to change behavior." -School Library Journal

"A story all about the ugly side of childhood...as painful as it is compelling." -Anime News Network

"A Silent Voice has an appealing lush, wallowing emotional embrace... a real tear jerker." -The Guardian

"An intricate account of teenage politics... its approach leads an old story down a little-trod, languidly beautiful path." -The Telegraph