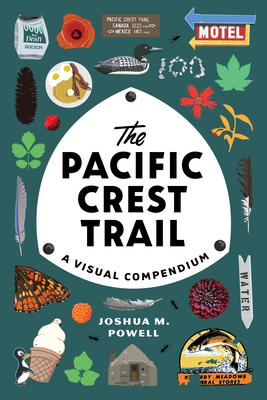 
Usually Ships in 1-5 Days
The Pacific Crest Trail as you've never seen it before! A visual feast for the senses, this highly designed paperback showcases the PCT through clever infographics, modern illustration, and insightful text. The book captures both the grandeur of the West Coast as well as the tiniest things that a thru-hiker notices and experiences during a 140-day trek.

Through the written word, graphic design, and illustration, The Pacific Crest Trail: A Visual Compendium conveys the beauty and the beastliness of a 2,650-mile wilderness hike from Mexico to Canada. The author chronicles the PCT through infographics about the trail and the thru-hikers' experience, and includes arresting illustrations of the landscape and minutiae of the trail. Everything from trail markers, weather challenges, and the stories behind popular toponyms to the songs stuck in a hiker's head, thru-hiker trail names, and food consumed will be addressed, making this an ideal gift for any outdoor enthusiast.
Joshua M. Powell grew up in Virginia and studied art and design at James Madison University, earning a BFA. After moving west, he began taking longer and longer trips into the backcountry before deciding to hike the Pacific Crest Trail from Mexico to Canada in 2014. He has worked in book design and production, receiving first place in the New York Book Show and the Gold Award in the PubWest Book Design Awards. Additionally, he has worked as a bookseller and a printing press operator. He currently lives in Spokane, Washington.

"A joy to page through, even if you have no intention of leaving your couch, packed with fun personal hiking stats (“135 chocolate bars” eaten), maps, wildlife and insect guides, trail notes, must-see landmarks, and even a page of vintage beer cans found on the trail."
—Portland Monthly

"The Pacific Crest Trail: A Visual Compendium is aesthetically pleasing, to say the least. The photos, colorful graphics, lists and anecdotes that fill its pages chronicle Powell’s hike in about as much detail as humanly possible."
—Spokesman-Review