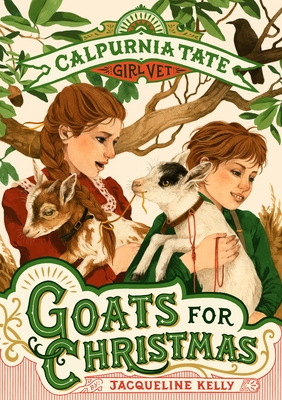 This is book number 6 in the Calpurnia Tate, Girl Vet series.

Featuring the charming characters from Jacqueline Kelly's Newbery Honor Book The Evolution of Calpurnia Tate, this exciting chapter book series introduces young readers to Callie Vee and the rough-and-tumble world of turn-of-the-century Texas. With illustrations by Jennifer L. Meyer, Goats for Christmas is a holiday story you won't want to miss!

Callie and Travis need sheep for the town Christmas pageant. Travis is playing the shepherd in the Nativity scene, and what's a shepherd without his flock? Unfortunately, Fentress is low on sheep—but not on goats.

When Callie and Travis decide to borrow two goats from their neighbor, they don't know what they're in for. As it turns out, the main trouble with goats is that they'll eat just about anything. This will be one Christmas pageant Fentress won't forget!

Jacqueline Kelly won the Newbery Honor for her first book, The Evolution of Calpurnia Tate. She was born in New Zealand and raised in Canada, in the dense rainforests of Vancouver Island. Her family then moved to El Paso, Texas, and Kelly attended college in El Paso, then went on to medical school in Galveston. After practicing medicine for many years, she went to law school at the University of Texas, and after several years of law practice, realized she wanted to write fiction. Her first story was published in the Mississippi Review in 2001. She now makes her home with her husband and various cats and dogs in Austin and Fentress, Texas.

Jennifer L. Meyer is an award-winning artist whose work has been featured multiple times in the Best in Contemporary Fantastic Art annual, Spectrum. Born into a fantasy-loving military family, she grew up a big fan of comics, reading, and drawing animals (especially bunnies). Jennifer's art has appeared in comic books, children's books, graphic novels, and other media. She is the illustrator of the Calpurnia Tate, Girl Vet series by Jacqueline Kelly.