The Girl From the Other Side: Siúil, A Rún Vol. 1 (Paperback) 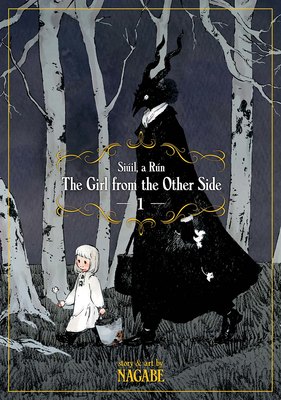 The Girl From the Other Side: Siúil, A Rún Vol. 1 (Paperback)

By Nagabe
List Price: $12.99
Our Price: $11.69
(Save: $1.30 10%)
An ethereal fantasy from the editorial team behind the New York Times bestselling series The Ancient Magus’ Bride The Girl From the Other Side: Siúil, a Rún is an all-new manga series that pulls readers into a magical and enchanting tale about a young girl and her demonic guardian. A haunting story of love and fantastical creatures, The Girl From the Other Side: Siúil, a Rún is a gorgeously-illustrated manga series. Each volume in the series will be released with a beautifully-textured matte finish cover and will include at least one full-color insert.In a world split between the Inside and the Outside, those living in both realms are told never to cross over to the other side, lest they be cursed. A young girl named Shiva lives on the other side, in a vacant village with a demonic guardian known only as “Teacher.” Although the two are forbidden to touch, they seem to share a bond that transcends their disparate appearances. But when Shiva leaves Teacher’s care to seek out her grandmother, the secret behind her mysterious living arrangement comes to light.
Nagabe is a manga creator best known for their series The Girl From the Other Side: Siúil, a Rún.

"...The Girl from the Other Side is a masterfully told comic." --J. Caleb Mozzocco, School Library Journal: Good Comics for Kids

"One of the most fulfilling aspects of Siúil is this conveyance of comics as language, of words and pictures as unified text. ... It's been a while since I loved a book as unequivocally as I loved The Girl from the Other Side, and I'm eager to see where it goes next." --Zainab Akhtar, Comics & Cola

"...the dread and mystery that permeate The Girl from the Other Side are so remarkable that there seems little point in doubting; it remains poised to continue as one of the most fascinating works of graphic fiction in recent memory." --Austin Price, Unwinnable