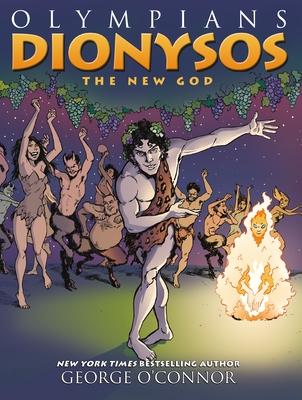 This is book number 12 in the Olympians series.

In the final volume of the New York Times–bestselling Olympians graphic novel series, author/artist George O’Connor focuses on Dionysos, the god of wine and madness.

The Olympians saga draws to a close with the tale of Dionysos, the last Olympian, and maybe, just maybe, the first of a new type of God. His story is told by the first Olympian herself, Hestia, Goddess of the hearth and home. From her seat in the center of Mt. Olympus, Hestia relates the rise of Dionysos, from his birth to a mortal mother, to his discovery of wine, his battles with madness and his conquering of death itself, culminating, finally, in his ascent to Olympus and Godhood.

George O'Connor is the New York Times–bestselling author of Olympians, the series of graphic novels featuring the tragic, dramatic, and epic lives of the Greek Gods. His first graphic novel, Journey into Mohawk Country, pushed the boundaries of the genre, using as its sole text the actual historical journal of the seventeenth-century Dutch trader Harmen Meyndertsz van den Bogaert. He also illustrated acclaimed playwright Adam Rapp’s Ball Peen Hammer. He teamed up with writer Daniel G. Newman on Unrig: How to Fix Our Broken Democracy, the first volume in the World Citizen Comics series. George is also the creator of popular picture books such as the New York Times–bestselling Kapow! and If I Had a Triceratops. He lives in Brooklyn, New York. You can visit him at georgeoconnorbooks.com.

Praise for Dionysos:
"O'Connor's illustrations are bursting with action, humor and lots of details. He researched the ancient myths in order to get as close as possible to the original stories. That means his gods and goddesses are fierce, but also voluptuous, mischievous and even snarky."—NPR Morning Edition

“A by turns epic, amusing, and tragic caper that’s even more toastworthy (for obvious reasons) than its 11 predecessors.” —Kirkus, starred review


Praise for the Olympians series:

“Definitely worth a visit for any young demigod.” —Rick Riordan, author of the Percy Jackson & the Olympians series

“George O’Connor has put a new spin on the Greek gods, making their tales fun and exciting again. This series is a must for every graphic novel collection.” —SLJ Good Comics for Kids

"O'Connor's brand of classical mythology for modern sensibilities serves as a good introduction to the gods and settings of the Greek myths." —Publishers Weekly