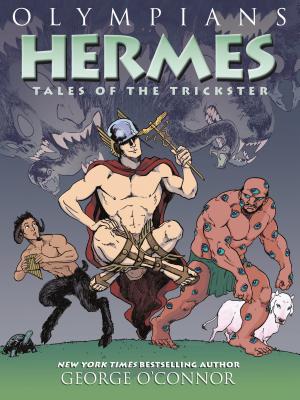 This is book number 10 in the Olympians series.

In volume ten of Olympians, George O’Connor delves into the myth of Hermes, the trickster god. From his infancy, when he bewitches animals and bends them to his will (stealing a herd of Apollo’s prize cattle in the bargain), to his adolescence and adulthood when he becomes father to the equally mischievous Pan, Hermes’s story is wildly entertaining as he brings a little bit of chaos to everything he touches or creates. This volume is sure to be a fan favorite with its wit, charm, and storytelling.

George O'Connor is the New York Times–bestselling author of Olympians, the series of graphic novels featuring the tragic, dramatic, and epic lives of the Greek Gods. His first graphic novel, Journey into Mohawk Country, pushed the boundaries of the genre, using as its sole text the actual historical journal of the seventeenth-century Dutch trader Harmen Meyndertsz van den Bogaert. He also illustrated acclaimed playwright Adam Rapp’s Ball Peen Hammer. He teamed up with writer Daniel G. Newman on Unrig: How to Fix Our Broken Democracy, the first volume in the World Citizen Comics series. George is also the creator of popular picture books such as the New York Times–bestselling Kapow! and If I Had a Triceratops. He lives in Brooklyn, New York. You can visit him at georgeoconnorbooks.com.