Merlin of the Magnolias (Hardcover) 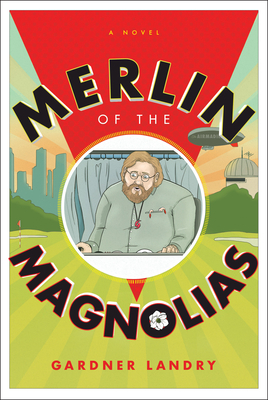 Merlin of the Magnolias (Hardcover)

"The linen besuited, white-booted barge of a man moving down the sidewalk was something to see, but the addition of the broad-brimmed straw fedora out of which protruded small antennae in four directions constituted another level of the unusual. The sight, augmented with Merlin's curious sidelong gait and frequent adjustment of knobs and rheostats alongside the hat's brim, would have been enough to induce in a hypothetical new-kid-on-the-block observer momentary catatonia, if not mild terror. Add an upward cock of the head inclined to the left and a visage that bespoke rapt listening, and one was presented with the most iconoclastic of Bayou Boughs' many eccentric denizens."

Merlin McNaughton stands out from his fellow Houstonians, both in his physical proportions and his odd preoccupations. Oblivious to these myriad idiosyncrasies, and the depths of his unplumbed emotional needs, he spends his days devouring worlds of food and his nights absorbing data about Earth's magnetic energies--including mysterious druidic ley lines. Financial strains upend Merlin's world, so he lands a full-time job at a blimp base. Night flights over the city and his flights of fancy concerning energy vortices keep Merlin's head in the clouds 24/7.

When his computer program foretells a negative energy that may harm the entire city, Merlin wastes no time constructing a portable particle accelerator to reverse the event. But when a major malfunction destroys his meticulous plans, Merlin learns that druidic runes aren't the only things he's been misinterpreting--and what's really important is what he's been overlooking all along.