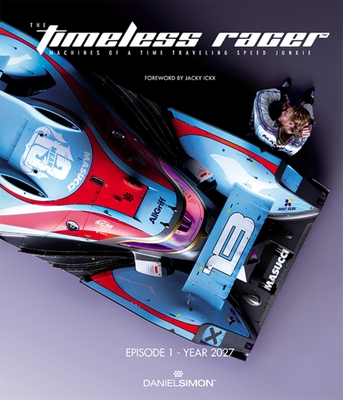 
Usually Ships in 1-5 Days
This book presents, in large-format images, Simon's unique virtually designed racing machines and tells the story of international racer Vic Cooper, who time-travels under the name 'Vic13' and later 'Mean13' to the past and the future to compete in a wide variety of motor races. His attempts are supported by world famous constructor Masucci, who built amazing vehicles for Cooper between the years 1916 and 2582. In this first volume of The Timeless Racer, Cooper time-travels to the year 2027, where he competes in the world-famous--and legendarily dangerous-- 48 Hours of America endurance race. The book puts three vehicles in the spotlight, shown in incredibly photo-realistic images. Car enthusiasts, design fans, and fiction addicts will be awed by fantastic and futuristic race cars in drawings and hyper-real renderings up to 24 inches wide. The book includes special attention to the fine details that make alternate worlds believable: fictitious sponsors and conflicts, with characters described in spectacular detail through photographs and back stories. In this captivating series, Simon returns to create an imaginary but entirely possible reality of glamour, speed, and honor. Welcome to The Timeless Racer. The foreword has been written by racing legend Jacky Ickx, who raced in the 1960s, '70s and '80s for many famed teams such as Ferrari, McLaren, Porsche, Brabham or Lotus. He is the only driver to have won in Formula One, Can-Am, Le Mans, and the Paris-Dakar rally. REVIEWS: "Daniel's designs are spectacular. And the machines--presented in every detail and a highly personal style--intrigue as always." -- Flavio Manzoni, director of Ferrari Design "Simon created a dream world I would race in any day-- this is really cool stuff " -- Andr Lotterer, winner 24 Hours of Le Mans with team Joest Audi R18, 2011 and 2012 "Daniel Simon's imagination is matched only by his spectacular vision of a sensational motor racing future. With its suave drivers, gorgeous girls, and international men of mystery, The Timeless Racer is a book like no other." -- British GQ magazine "Daniel's imagination is extraordinary. It is joyful to see this fantasy blend of past and future racing." -- From the foreword by Jacky Ickx, racing legend "I have photographed motor racing for 50 years, and I am amazed by Simon's virtual imagery." -- Rainer W. Schlegelmilch, famed racing photographer

Daniel Simon is an internationally acclaimed designer and trailblazing virtual image creator. He worked for hyper car maker Bugatti and collaborated with Formula 1, Puma and Lotus. Simon is author of the best-selling book Cosmic Motors, a collection of spectacular science-fiction vehicles. Since 2008 Simon has worked with famed directors to create vehicles for Hollywood blockbusters such as Tron: Legacy, Captain America, Prometheus, and the upcoming Oblivion. He lectures around the globe at leading design colleges and global corporations, and is a car and motorsport enthusiast.