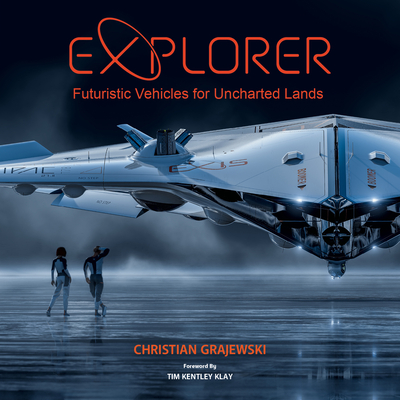 
Usually Ships in 1-5 Days
The year is 2065. The end of Earth and all its habitants is imminent. Using the world's greatest technologies, a new generation of highly advanced, autonomous robotic vehicles is developed to explore new lands for human colonization. Inspired by legendary futurists such as Syd Mead (Blade Runner), German industrial designer and concept artist Christian Grajewski used his expert knowledge of automotive design and his fascination with animal anatomy to create fifteen stunning, interplanetary vehicles. Each varies in size and technological capabilities, yet they are unified by one overarching goal: to preserve the human race. From the stealth rotorcraft Hornet to the massive space transporter Orca, the designs of Explorer were fueled by Grajewski's deep desire to launch vehicles beyond Earth's solar system. He drew from his professional experience working on the design team at Volkswagen Design Center Potsdam, where he developed concepts for such carmakers as Lamborghini, Audi, and Porsche. Explorer compiles Grajewski's early sketches, wondrous renderings, and design reflections that together make a case for historic multinational cooperation and the incredible innovations such collaborations can achieve.