Who Am I to Judge?: Responding to Relativism with Logic and Love (Paperback) 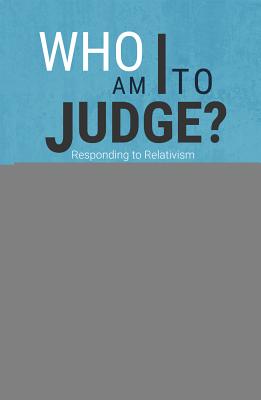 Who Am I to Judge?: Responding to Relativism with Logic and Love (Paperback)

"Don't be so judgmental!"

"Why are Christians so intolerant?"

"Why can't we just coexist?"

In an age in which preference has replaced morality, many people find it difficult to speak the truth, afraid of the reactions they will receive if they say something is right or wrong. Using engaging stories and personal experience, Edward Sri helps us understand the classical view of morality and equips us to engage relativism, appealing to both the head and the heart. Learn how Catholic morality is all about love, why making a judgment is not judging a person's soul, and why, in the words of Pope Francis, "relativism wounds people." Topics include:

Dr. Edward Sri is a theologian, author and well-known Catholic speaker who appears regularly on EWTN.  Each year he speaks to clergy, parish leaders, catechists and laity from around the world.

He has written several best-selling books, including A Biblical Walk through the Mass, Walking with Mary and Who Am I to Judge?–Responding to Relativism with Logic and Love. His latest release is Into His Likeness: Be Transformed as a Disciple.

He is a founding leader with Curtis Martin of FOCUS (Fellowship of Catholic University Students) and serves as a professor of theology at the Augustine Institute in Denver, Colorado.

Dr. Sri leads pilgrimages to Rome and the Holy Land each year and is the host of the weekly podcast "All Things Catholic." He holds a doctorate from the Pontifical University of St. Thomas Aquinas in Rome. He resides with his wife Elizabeth and their eight children in Littleton, Colorado.