Thor Speaks!: A Guide to the Realms by the Norse God of Thunder (Secrets of the Ancient Gods) (Hardcover) 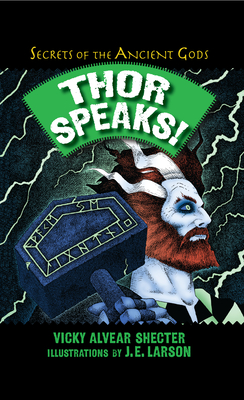 Thor Speaks!: A Guide to the Realms by the Norse God of Thunder (Secrets of the Ancient Gods) (Hardcover)


Usually Ships in 1-5 Days
One day in the distant future, Thor, the Norse god of thunder, is destined to battle the giant snake that threatens to devour the world. Until then, mortals of Middle Earth look to Thor and his magic hammer for protection from evil. In this third volume of the Secrets of the Ancient Gods series, Thor takes time from his duties to lead readers through the mythological Norse realms, those mysterious worlds that are home to gods, giants, elves, and monsters. He also delves into the age of the Vikings and reveals how they lived and what they believed. Using Thor as her humorous narrator, author Vicky Alvear Shecter provides a well-researched and unconventional nonfiction introduction to Norse mythology. Includes a glossary, bibliography, and index.
Vicky Alvear Shecter is the author of Hades Speaks! A Guide to the Underworld by the Greek God of the Dead; Anubis Speaks! A Guide to the Afterlife by the Egyptian God of the Dead; Cleopatra Rules! The Amazing Life of the Original Teen Queen; Cleopatra's Moon; Curses and Smoke: A Novel of Pompeii; and Alexander the Great Rocks the World. She lives in Atlanta, Georgia. vickyalvearshecter.com

J. E. Larson is the illustrator of Hades Speaks! A Guide to the Underworld by the Greek God of the Dead. His work embraces the phantasmagorical and reflects his love of Victorian nonsense, German expressionism, and monster movies. He lives in Rochester, Minnesota.

"Mortals, do you dare follow the god of "strength and weather and mighty muscles" on a tour through Norse mythology?...Larson's dark, operatic tableaux of melodramatically posed figures clad in outsized headgear and geometrically patterned cloaks add a comically Wagnerian tone... Return trips are definitely in the offing." &#8212;Kirkus Reviews

"In this third entry in the Secrets of the Ancient Gods series... Shecter assumes the rough-and-tumble voice of 'everyone's 'good-buddy' god,' Thor, introducing more than a dozen myths and the gods central to them.... Larson's delicately etched pen-and-ink illustrations have a creepy, Goreyesque edge... Extensive character descriptions, source notes, and a glossary round out this entertainingly informal introduction to Norse legends." &#8212;Publishers Weekly