I Got the Rhythm (Hardcover) 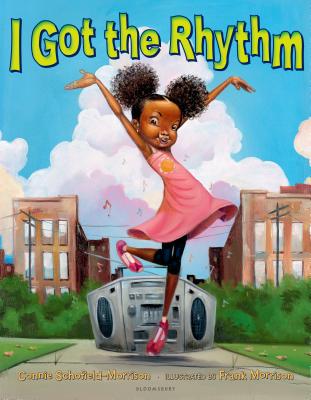 I Got the Rhythm (Hardcover)

By Connie Schofield-Morrison, Frank Morrison (Illustrator), Connie Schofield-Morrison (Text by)
List Price: $17.99
Our Price: $16.19
(Save: $1.80 10%)
Usually Ships in 1-5 Days
On a simple trip to the park, the joy of music overtakes a mother and daughter. The little girl hears a rhythm coming from the world around her- from butterflies, to street performers, to ice cream sellers everything is musical! She sniffs, snaps, and shakes her way into the heart of the beat, finally busting out in an impromptu dance, which all the kids join in on! Award-winning illustrator Frank Morrison and Connie Schofield-Morrison, capture the beat of the street, to create a rollicking read that will get any kid in the mood to boogie.
Connie Schofield-Morrison has been writing since she was a young girl and is inspired every day by the big sounds and bright colors of the world around her. I Got the Rhythm is her first picture book.

FRANK MORRISON is a renowned fine artist whose work was featured in Our Children Can Soar. He has lent his talents to many picture books, including Alex Rodriguez's Out of the Ballpark, Queen Latifah's Queen of the Scene, and Brenda Roberts' Jazzy Miz Mozetta, for which he won the Coretta Scott King/John Steptoe Award for New Talent. He lives in Georgia.

Connie Schofield-Morrison has been writing since she was a young girl and is inspired every day by the big sounds and bright colors of the world around her. I Got the Rhythm is her first picture book.

“The driving beat of debut author Schofield-Morrison's narrative is likely to have readers bouncing and tapping right along with her . . . An upbeat celebration of the senses, self-expression, and camaraderie.” —Publishers Weekly

“The bright palette and vibrant tones of Morrison's loosely painted illustrations echo the energy of the text nicely . . . the book begs readers to sing and move along with this little dancer.” —Booklist

“For a storytime that will get bodies rocking, fingers popping, and rhythm flowing.” —Library Media Connection

“The little girl at the center of it all is wholly likable in her joyful approach . . . This will work well in an interactive storytime for preschoolers, as listeners are invited to shake and stomp along with the happy protagonist.” —BCCB

“Ready made for storytime, Schofield-Morrison's text pulses with a beat of its own and practically demands audiences to clap along . . . The urban setting and varied cast of characters make this title particularly valuable, showcasing diversity as an integral part of everyday life.” —School Library Journal