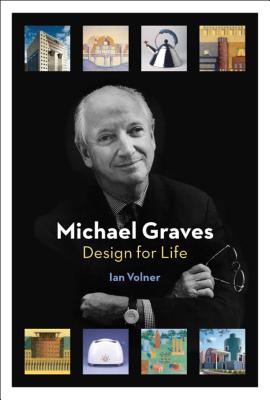 
Difficult to Find
One of the most prominent and prolific designers and architects of the late twentieth century, Michael Graves is best known for his popular product designs, including the world-famous Alessi whistling-bird teakettle, and controversial buildings, such as the Portland Building in Oregon, Humana Building in Kentucky, and Dolphin and Swan Hotels at Walt Disney World, Florida. Graves was widely seen as the leading voice of postmodernist architecture, which reintroduced human scale, color, and, sometimes, playful forms into the stark white vocabulary of modernism. Following a devastating illness that paralyzed him from the chest down, Graves became a tireless designer and advocate of improved health-care products and facilities before his sudden death in 2015. Shortly before this, he began a series of interviews with journalist Ian Volner, which form the basis of this biography of a remarkable designer. Volner also conducted numerous interviews with Graves's family, patrons, colleagues, and friends. What emerges is a meticulously researched, anecdote-rich human story, as well as a primer on the American architecture scene of the past sixty years and a portrait of a man whose deep passion for his art brought pleasure to millions.

Ian Volner has contributed articles on architecture, design, and urbanism to the Wall Street Journal, the New Republic, Harper's and the New Yorker, and is a contributing editor at Architect and Surface. He is also the author of This Is Frank Lloyd Wright.

"In this meticulously detailed biography, journalist Ian Volner explores the life of Michael Graves, renowned designer and architect. Perhaps best known for his design of the Alessi whistling-bird teakettle and bold building design, Graves left a resounding mark in the history of product design and in the broader visual landscape before his sudden death in 2015. This book tells the story of the man and his devoted relationship to his art."
- Design Observer

"What emerges is an anecdote-rich human story, as well as a primer on the American architecture scene of the past 60 years, and a portrait of a man whose deep passion for his art brought pleasure to millions."
- New Design (UK)

"Volner presents more than a biography of postmodern architect Graves (1934-2015). The book is also a history of the style Graves popularized. Detailing Graves' personal and professional story alongside a broader one of professional infighting and conceptual debates, Volner has written an accessible book about a challenging period in the history of architecture. Though Graves saddled his designs with historical references and playful narratives, his buildings often met with a confused and disappointed public. With a fine eye and clear prose, Volner delivers straightforward explanations of such award-winning Graves designs as the Portland Municipal Services Building in Oregon and the Humana office building in Louisville, Kentucky. Author and subject were friends, and the relationship colors Volner's account of episodes private (Graves' divorces) and professional (Graves' failed commission to redesign the Whitney Museum of American Art in New York). Ultimately, this connection allows Volner to tell a touching and human story of how a midwesterner shaped contemporary architecture."
- Booklist

"The fundamental requirements of an architect's biography are that the work must be significant and the life story of the architect should be worthy of interest. Ian Volner's Michael Graves: Design for Life certainly fills the bill and then some."
- Buffalo News

"This book pays tribute to Michael Graves (1934-2015) as one of the prime movers and makers of POMO, or Postmodernism in the 1980s, which pulled architectural design out of the hands of engineers and into the hearts of historians and artists. Graves was born in Indianapolis, one of the stockyard capitals of the Midwest, where his father worked as a trader in the deconstruction of animals. Graves called the city "Indian-no place." He taught at Princeton University's School of Architecture from 1962 to 2000, fighting for public architecture all over the country in the form of libraries, town halls, hotels, and office towers. He died in 2015 of heart failure following 12 years of wheelchair-bound life owing to a painful spinal infection in 2002. This book is less academic and objective than anecdotal and informative-stemming from dozens of recorded interviews with Graves and everyone who knew him well. VERDICT This book has real gravity, yet it sparkles with light, so it benefits not just accomplished professionals but anyone who admires design." - Library Journal

"Whether giving humdrum household products an aesthetic revamp for Target or injecting a heaping dose of whimsy into Disney hotels, the late architect Michael Graves is famed for bringing a playful - and sometimes derided - post-modern sensibility to the masses. Graves' true legacy however, was as a tireless champion of universal design. After suffering an infection that left him paralyzed from the waist down in 2003, Graves dedicated his career to ensuring that all people, including the elderly and those with disabilities, benefitted from the healing properties of good design. This anecdote-driven bio, which work commenced on prior to Graves' death in 2015, includes interviews with the subject himself along with friends, family and colleagues."
- Mother Nature Network

"One of the first names conjured up at the mention of postmodern architecture is Michael Graves (1934-2015), who will forever be associated with that architectural style of the late 20th century and use of color and playful forms. Graves's work provided a kind of whimsical flavor to the somewhat predictable vocabulary of the modernist period that it grew out from. But Graves was more than an architect. His contributions also extended to products and the wide range of illustrations, design ideas, and sketches of ideas that emanated from his amazing mind. Volner (a freelance writer who specializes in architecture) had the opportunity to converse with Graves over a period of time before his death, and the results of those and other interviews with family, partners, and other colleagues are the basis for Michael Graves: Design for Life. The book is a well-documented biography of one of the most influential designers of the latter half of the 20th century. It is more than adequately loaded with high quality drawings, illustrations, and photographs depicting the wide range of Graves's graphic genius. Summing Up: Essential. All readers."
- ALA/Choice - Review