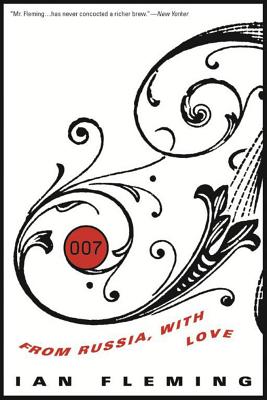 James Bond is marked for death by the Soviet counterintelligence agency SMERSH in Ian Fleming's masterful spy thriller, and the novel that President John F. Kennedy named one of his favorite books of all time.

SMERSH stands for "Death to Spies" and there's no secret agent they'd like to disgrace and destroy more than 007, James Bond. But ensnaring the British Secret Service's most lethal operative will require a lure so tempting even he can't resist. Enter Tatiana Romanova, a ravishing Russian spy whose "defection" springs a trap designed with clockwork precision. Her mission: seduce Bond, then flee to the West on the Orient Express. Waiting in the shadows are two of Ian Fleming's most vividly drawn villains: Red Grant, SMERSH's deadliest assassin, and the sinister operations chief Rosa Klebb--five feet four inches of pure killing power.

Bursting with action and intrigue, From Russia with Love is one of the best-loved books in the Bond canon--an instant classic that set the standard for sophisticated literary spycraft for decades to come.

The text in this edition has been restored by the Fleming family company Ian Fleming Publications, to reflect the work as it was originally published.

Ian Fleming (1908-1964), creator of the world's best-known secret agent, is the author of fourteen James Bond books. Born in London in 1908 and educated at Eton and Sandhurst, he became the Reuters Moscow correspondent in 1929. In the spring of 1939, Fleming went back to Moscow as a special correspondent for the London Times. In June of that same year, he joined Naval Intelligence and served throughout World War II, finally earning the rank of Commander, RNVSR (Sp.). Much of the James Bond material was drawn directly from Fleming's experiences as an intelligence officer. Later, Fleming became a consultant on foreign affairs for the London Sunday Times, by which time he had become far better known as the creator of James Bond.