The Making of Modern China: The Ming Dynasty to the Qing Dynasty (1368-1912) (Understanding China Through Comics #4) (Paperback) 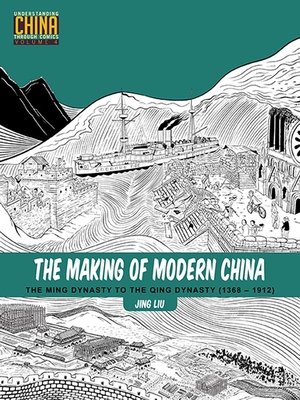 The Making of Modern China: The Ming Dynasty to the Qing Dynasty (1368-1912) (Understanding China Through Comics #4) (Paperback)

This is book number 4 in the Understanding China Through Comics series.

Does what it sets out to do and serves as a Chinese history text teenagers might actually read. --Asian Review of Books on Division to Unification in Imperial China

The fourth volume in the Understanding China Through Comics series covers the stunningly productive Ming dynasty and its fall to the Manchus under the Qing, the last Chinese dynasty. The book also addresses Wang Yangming's School of Mind and the painful process of modernization and conflict with the West and Japan, including the Opium Wars and the Boxer Rebellion. Includes timeline.

Jing Liu is a Beijing- and Davis, CA-based designer and entrepreneur who uses his artistry to tell the story of China.

Jing Liu is an artist and entrepreneur from Beijing, China. He is currently the Managing Director of Moli Design, a China-based design firm that counts the BBC, MasterCard, The Ford Foundation, PriceWaterhouseCoopers, and UNICEF among its many clients. Liu graduated from Beijing University of Technology with undergraduate degrees in industrial design and engineering, and a masters in international economics and trade.