Atheist Manifesto: The Case Against Christianity, Judaism, and Islam (Paperback) 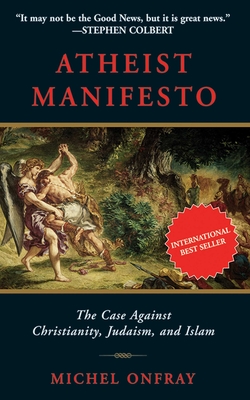 Atheist Manifesto: The Case Against Christianity, Judaism, and Islam (Paperback)


Difficult to Find
“A strong case for removing all the remnants of Judeo-Christian ideology from our secular culture.”—Freedom from Religion Foundation.

Not since Nietzsche has a work so groundbreaking and explosive questioned the role of the world’s three major monotheistic religions. If Nietzsche proclaimed the death of God, Onfray insists that not only is God still very much alive but also increasingly controlled by fundamentalists who pose a danger to the nature of human morality.

Documenting the ravages of religious intolerance over the centuries, the author makes a strong case against the three religions for their obsession with purity and their contempt for reason and intelligence, individual freedom, desire, and the human body, as well as their disdain for women, sexuality, and pleasure. In their place, all three demand faith and belief, obedience and submission, and extolling the “next life” to the detriment of the here and now.

Tightly argued, this is a work that is sure to stir debate on the role of religion in American society—and politics.