The Kimchi Chronicles: Korean Cooking for an American Kitchen: A Cookbook (Hardcover) 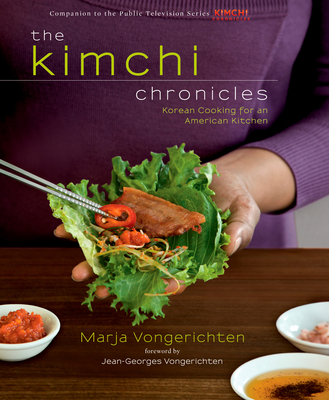 The Kimchi Chronicles: Korean Cooking for an American Kitchen: A Cookbook (Hardcover)


Difficult to Find
Long a favorite of in-the-know foodies, Korean cuisine is poised to become the next big food trend,
with dishes like bibimbap and kimchi popping up on menus nationwide. In a new PBS series that will
begin airing in May 2011, Marja Vongerichten and three-star Michelin chef Jean-Georges Vongerichten will give viewers an insider's look at Korea as they travel the country and experience its authentic flavors and cultural traditions. As the show's companion cookbook, The Kimchi Chronicles will include a recipe for every dish featured, explaining how they can be easily duplicated in an American kitchen. Chef Vongerichten will also offer original dishes with a lighter, modern flair, showing how the flavors of the Korean table can be readily integrated into any meal.


For lovers of Korean food, those eager to experiment in search of an accessible introduction to this
intriguing cuisine, and readers who just want a little taste of culinary and cultural exploration outside the Western Hemisphere, The Kimchi Chronicles is sure to provide plenty of inspiration, information, and entertainment.
Marja Vongerichten is a Korean-born former actress and model. At home with her husband, Jean-Georges Vongerichten, she cooks authentic, Korean dishes. She and Jean-Georges live in New York City with their daughter Chloe.