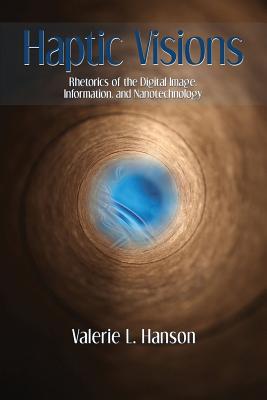 
Usually Ships in 1-5 Days
VISUAL RHETORIC SERIES, Edited by MARGUERITE HELMERS "In HAPTIC VISIONS, Valerie Hanson provides a careful and far-reaching study of the discourses and practices of nanotechnology, but its implications are not limited to the case example at hand, which is fascinating in its own right and deserves to be read by students and researchers who are interested in the rhetorical dynamics of science. Hanson's original and insightful analysis of the contexts surrounding the scanning tunneling microscope also opens new ways of thinking about visuals, about visual production and reception, and about the role of persuasion in scientific knowledge-making. This book is a must-read for anyone with interests in the overlapping areas of rhetoric, science, and the visual." -STUART SELBER, The Pennsylvania State University "We see by touching, we touch by seeing. This used to be true only metaphorically. Nanotechnology and other contemporary technosciences produce knowledge and employ instruments that render touch visible, literally. Valerie Hanson's HAPTIC VISIONS: RHETORICS OF THE DIGITAL IMAGE, INFORMATION, AND NANOTECHNOLOGY explores the new ways of relating ourselves to the world and participating in what we observe. Original in its approach and insightful in its analysis, Haptic Visions forges new connections between rhetoric, visual culture studies, and the philosophy of technoscience." -ALFRED NORDMANN, Institut f r Philosophie, Technische Universit t Darmstadt and the University of South Carolina. "Valerie Hanson scans the nooks and crannies of the human scale language and images with which nanoscale science has begun to translate an extraordinarily small, strange, and promising new point of view on matter and energy. The result is a tour de force analysis of the rhetorical layer of nanoscience. HAPTIC VISIONS is a must read users' guide for understanding the emerging but often invisible nanoscale technological revolution that will transform our planet in ways that we literally cannot envision." -RICHARD DOYLE, The Pennsylvania State University VALERIE HANSON is Associate Professor of Writing in the School of Liberal Arts at Philadelphia University. Her research focuses on the rhetoric of science and design. She has published articles on the rhetoric of nanotechnology in journals such as Science Communication and Science as Culture. She has been a fellow in an interdisciplinary research group at the Zentrum f r interdisziplin re Forschung (Center for Interdisciplinary Research) at the University of Bielefeld (Germany).