Agency: The Four Point Plan (F.R.E.E.) for ALL Children to Overcome the Victimhood Narrative and Discover Their Pathway to Power (Hardcover) 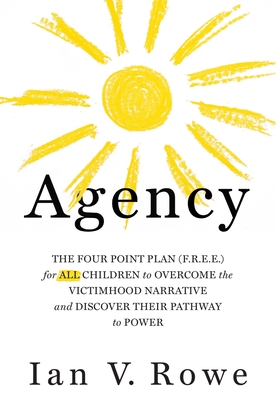 Agency: The Four Point Plan (F.R.E.E.) for ALL Children to Overcome the Victimhood Narrative and Discover Their Pathway to Power (Hardcover)

Every child in America deserves to know that a path to a successful life exists and that they have the power to follow it. But many never set foot on that path because they grow up hearing the message that systemic forces control their destinies, or that they are at fault for everything that has gone wrong in their lives.

These children often come from difficult circumstances. Many are raised by young, single parents, live in disadvantaged neighborhoods, attend substandard schools, and lack the moral safeguards of religious and civic institutions. As a result, they can be dispirited into cycles of learned helplessness rather than inspired to pursue their own possibilities.

Yet this phenomenon is not universal. Some children thrive where others do not. Why? Are there personal behaviors and institutional supports that have proven to make a difference in helping young people chart a course for their futures? Agency answers with a loud and clear “yes!”
This book describes four pillars that can uplift every young person as they make the passage into adulthood: Family, Religion, Education, and Entrepreneurship. Together, these pillars embody the true meaning of freedom, wherein people are motivated to embrace the ennobling responsibilities of building healthy social structures and shaping the outcomes of their own lives.

For that reason, Ian Rowe calls the four pillars the FREE framework. With this framework in place, children are empowered to develop agency, which Rowe defines as the force of one’s free will, guided by moral discernment. Developing agency is the alternative to the debilitating ‘blame-the-system’ and ‘blame-the-victim’ narratives. It transcends our political differences and beckons all who dare to envision lives unshackled by present realities.

In addition to making the case for agency, Rowe shares his personal story of success coming from an immigrant family. He defends America as an ever-improving country worthy of our esteem. He corrects misguided calls for “anti-racism” and “equity,” and champions a game plan for creating new agents of agency, dedicated to promoting the aspirational spirit of America’s children, and showing them the path that will set them FREE.

Ian V. Rowe is a senior fellow at the American Enterprise Institute, where he focuses on education and upward mobility, family formation, and adoption. Mr. Rowe is the cofounder and CEO of Vertex Partnership Academies, a new network of character-based, International Baccalaureate public charter high schools opening in the Bronx in 2022 and is the chairman of the board for Spence-Chapin, a nonprofit adoption services organization that provides adoption and adoption support services. Rowe is a senior visiting fellow at the Woodson Center and a writer for the 1776 Unites Campaign. He is a trustee at the Thomas B. Fordham Institute and a senior advisor for the Foundation Against Intolerance & Racism (FAIR For All), Parents Defending Education, and the National Summer School Initiative (NSSI).

Mr. Rowe is widely published and quoted in the popular press, including The Wall Street Journal, USA Today, C-SPAN, the New York Post, the Washington Examiner, Education Week, and Education Next. In addition to serving ten years as CEO of Public Prep, a nonprofit network of public charter schools based in the South Bronx and Lower East Side of Manhattan, he was deputy director of postsecondary success at the Bill & Melinda Gates Foundation. Rowe won two public service Emmys while serving as the senior vice president of strategic partnerships and public affairs at MTV. He was the director of the strategy and performance measurement at the USA Freedom Corps office in the White House and cofounder and president of Third Millennium Media. In its early days, Mr. Rowe was also a senior staff member for Teach For America.

After receiving a high school diploma in electrical engineering from Brooklyn Technical High School, he earned a Bachelor of Science degree in Computer Science Engineering from Cornell University’s College of Engineering. He earned an MBA from Harvard Business School, where he was the first black editor-In-chief of the Harbus, the Harvard Business School newspaper. Serving as an elected school board member, he resides in Pelham, New York, with his wife and two children.

"An eloquent argument....[Rowe] is calling not for superstar behavior but an adjustment in normal ways of going through normal lives."
—John McWhorter, The New York Times

"Agency is a book that people on both the left and the right should read. It is a guidebook for those who want to help lift up lower-income communities and struggling individuals. It is common sense reimagined."
—Ayaan Hirsi Ali, Research Fellow at the Hoover Institution and founder of the AHA Foundation

“This hope-filled, wise and spiritually enlightening book should be read—must be read—by every parent, teacher, legislator and community activist in America. With passion, clarity of thought and an abiding faith in the unlimited possibilities of this great nation, accomplished educator and entrepreneur Ian Rowe provides a road map for all of our children to realize their full human potential."
—Glenn Loury, Merton P. Stoltz Professor of the Social Sciences and Professor of Economics, Brown University

“What a strange world we live in, where the party of libertarians declares we are radically free, and the party of fate—the party that preaches the dogma of ‘systemic racism’—declares that only the state can save us.  Ian Rowe tells us there is a third, realistic alternative: we flourish and discover true liberty only in and through our mediating institutions, most notably, our families.  In this fine-grained and deeply personal account, we discover a way forward for our entire country.”
—Joshua Mitchell, professor of government, Georgetown University

“In Agency, Ian Rowe provides a thoughtful and nuanced analysis of the challenges facing struggling communities and offers a practical, data-driven framework to empower even those from the most difficult circumstances to overcome barriers and succeed. Rowe’s FREE framework centers on the importance of faith, family, education, and personal responsibility, and he recognizes that a vibrant civil society with strong local institutions is a key ingredient for human flourishing. Rowe’s message is a compassionate, inspiring, and refreshing alternative to the divisive, disempowering rhetoric we so often hear today.”
—Elise Westhoff, president, and CEO, Philanthropy Roundtable


“This book is a gift to all those in the rising generation who are baffled by the ominous pessimism that our culture now projects at them from every direction and find themselves unable to envision a future that speaks to their highs longings. They deserve better from us. And Rowe offers them better by helping them see where a morally meaningful sense of direction might be found.”
—Yuval Levin, director of social, cultural, and constitutional studies at the American Enterprise Institute and editor of National Affairs