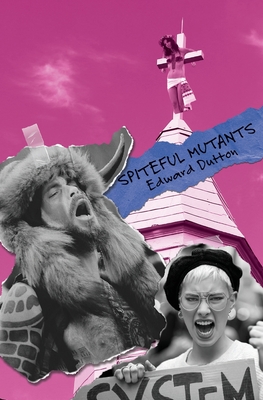 Every zombie movie has a terrifying underlying message. The enemy isn't supernatural or an alien from another planet. "The enemy is . . . us " The "undead" -- mutated humans, grotesque versions of their previous selves -- are destroying everything in their path and bringing about the downfall of civilization. Even worse, they are contagious, gradually absorbing the few survivors left into the hoard.

In Spiteful Mutants, evolutionary psychologist Edward Dutton argues that we are experiencing a "zombie apocalypse" of our own. The critical threat to civilization is not so much enemies abroad as it is nihilistic and self-destructive tendencies within our own populations. Dutton examines such salient social phenomena through a Darwinian lens: from BLM to QAnon; from those seeking sexual transformation to the Incels who don't have sex at all; from atheists to those with a religious zeal for "social justice." All these phenomena can best be understood as genetic results of the Industrial Revolution.

Human evolution is an ongoing process. The question of who we, as a species, will become is a matter of who is being selected for in a particular ecology. Before industrialization, child mortality was the crucible of evolution: those who were physically and mentally sick -- that is, who possessed high levels of genetic mutation -- rarely survived into adulthood. The Industrial Revolution, and resultant medical advances, brought about the collapse of child mortality, allowing the explosive growth of people who are highly mutated in body and mind, and who would not have otherwise survived. These mutants, walking among us, are "spiteful" in the sense that they actively affect the functioning of the group. They generate polarization and chaos, depravity and dysphoria, and even the gradual collapse of fertility. A new specter is haunting the industrialized world, the specter of Spiteful Mutants, a menace of our own making.

"A ripping yarn, though a handsomely footnoted, scientific one. There is also a seductive, meta-level lesson hidden in plain sight. Until and unless opinion leaders return to a biologically informed survivalism, the West will continue to decline."

Formerly of the Max Planck Institute

Edward Dutton is Professor of Evolutionary Psychology at Asbiro University. Born in London in 1980, Dutton read Theology at Durham University, before completing a PhD in Religious Studies at Aberdeen University in 2006. He is based in Oulu in northern Finland. His books include Making Sense of Race (2020), Witches, Feminism, and the Fall of the West (2021), Islam: An Evolutionary Perspective (2021), among many others.