The Power of Your Subconscious Mind: Unlock the Secrets Within (Paperback) 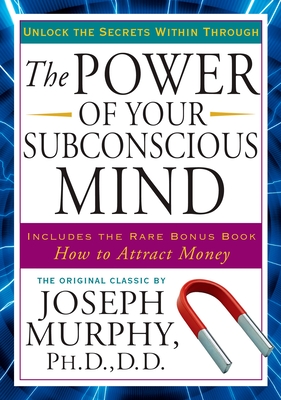 The Power of Your Subconscious Mind: Unlock the Secrets Within (Paperback)

By Joseph Murphy
List Price: $12.00
Our Price: $10.80
(Save: $1.20 10%)
Usually Ships in 1-5 Days
Here is the complete, original text of the millions-selling self- help guide that reveals your invisible power to attain any goal-paired with a compelling bonus work, How to Attract Money.

The Power of Your Subconscious Mind, one of the most beloved and bestselling inspirational guides of all time, shows how changing your thought patterns can produce dramatic improvements in your life. Using practical, easy-to-understand techniques and real-world case studies, Dr. Joseph Murphy reveals the vast influences of the subconscious mind on all aspects of existence-money, relationships, jobs, happiness-and how you can apply and direct its power to achieve your goals and dreams.

A life-changing classic since its initial publication in 1963, The Power of Your Subconscious Mind has opened millions of readers to the unseen force within them. Now, the fully intact, original text is redesigned and repackaged in this affordable, handsome volume-which also features one of Murphy's most irresistible works, How to Attract Money. This is the flagship edition of a self-help landmark.
A native of Ireland, Joseph Murphy (1898 — 1981) was a prolific and widely admired New Thought minister and writer, best known for his motivational classic, The Power of Your Subconscious Mind, an international bestseller since it first blazed onto the self-help scene. His pamphlet How to Attract Money first appeared in 1955, and likewise entered many editions. Murphy wrote widely on the auto-suggestive and metaphysical faculties of the human mind and is considered one of the pioneering voices of affirmative-thinking philosophy.