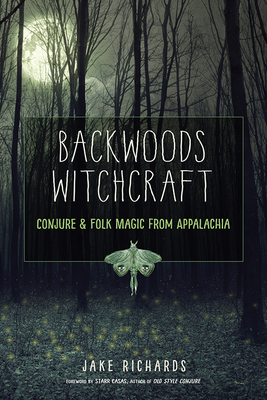 In Backwoods Witchcraft, Jake Richards offers up a folksy stew of family stories, lore, omens, rituals, and conjure crafts that he learned from his great-grandmother, his grandmother, and his grandfather, a Baptist minister who Jake remembers could "rid someone of a fever with an egg or stop up the blood in a wound." The witchcraft practiced in Appalachia is very much a folk magic of place, a tradition that honors the seen and unseen beings that inhabit the land as well as the soil, roots, and plant life.

The materials and tools used in Appalachia witchcraft are readily available from the land. This "grounded approach" will be of keen interest to witches and conjure folk regardless of where they live. Readers will be guided in how to build relationships with the spirits and other beings that dwell around them and how to use the materials and tools that are readily available on the land where one lives.

This book also provides instructions on how to create a working space and altar and make conjure oils and powders. A wide array of tried-and-true formulas are also offered for creating wealth, protecting one from gossip, spiritual cleansing, and more.

While Jake Richards doesn't hold initiations, titles, or degrees, he clearly does hold his Appalachian heritage close to his blood and bones. He has practiced Appalachian folk magic for almost a decade and teaches classes on the subject in Jonesborough, Tennessee, where he owns Little Chicago Conjure, a supplier of Appalachian folk magic supplies and ingredients.   Starr Casas, a veteran rootworker and traditional conjure woman, has been helping people for over 35 years through her ancestral art of old style conjure. She is one of the preeminent modern masters of this southern American style of folk magic, and she maintains an active teaching schedule. Starr is also among the organizers of the annual New Orleans Folk Magic Festival. Visit her at www.oldstyleconjure.com.

"Engaging, sincere, and delightfully friendly, Jake Richards brings the unified spirit of all magick workers into your hands. A must have for those interested in folk magick practices, whether for educational enlightenment or practical use. Fresh and honest, Backwoods Witchcraft brings the power home." –Silver RavenWolf, author of Solitary Witch and The Witching Hour
— Silver RavenWolf

“Wander the ways of witchcraft in the mountains of Appalachia! In Backwoods Witchcraft, Jake Richards presents a fresh perspective on the practices, lore, and magick of the hillfolk of Tennessee. Jake offers a plethora of charming tales from his family and upbringing as the reader is delighted to partake in a time honored, home grown, century’s old culture of ritual, spells, and beliefs from the American South.” --Christopher Orapello, podcaster, artist, and coauthor of Besom, Stang & Sword
— Christopher Orapello

“In Backwoods Witchcraft, Jake Richards shares his memories of growing up with Appalachian folk magic practices as they were passed on to him through generations within his family. In so doing he offers a snapshot in time, recording and preserving a tradition of American folk practices, many of which are being forgotten in the post-industrial age. Richards presents family stories and experiences that came with learning the charms and formulas themselves. In doing so he teaches the techniques and in the context of the ideas behind the recipes, something that is often lacking in a lot of books on American folk magic. His writing comes across as humble, sincere, simple, and clear to follow. Backwoods Witchcraft is a great contribution to the writings on traditional folk magic.” —Mat Auryn, author of Psychic Witch: A Metaphysical Guide to Meditation, Magick, and Manifestation
— Mat Auryn

"Richards, owner of and folk magic teacher at Little Chicago Conjure in Jonesborough, Tenn., presents the charms, conjures, and culture of Appalachia in this enjoyable book meant to “piece together lost works and ways” he was taught by his great-grandmother. Raised in a family with a variety of spiritual influences—including African, European, and Native traditions—Richards paints a very personal portrait of his childhood spiritual education. At home, rituals and superstitions were not thought of as a specific magic system, but rather activities woven into everyday life, which is reflected in Richards’s rambling, conversational style. He organizes the wealth of material into categories that explore how to make use of tools (ribbon, yarn), techniques (fortune telling, reading omens), and remedies (cures for physical and spiritual ailments). For Richards, following natural cycles and engaging in activities such as gardening, farming, and hunting keep him “close to the rhythms and seasons of the hills.” Though seemingly at odds, the Christian religion plays a prominent role in Appalachian magic; Bible verses become templates for spells, and references to God, Jesus Christ, and the saints appear throughout the rituals. Richards lovingly, thoughtfully provides a rare look into the heritage of his people that will appeal to any reader interested in American folk spirituality." --Publishers Weekly, (June 2019)
— Publishers Weekly