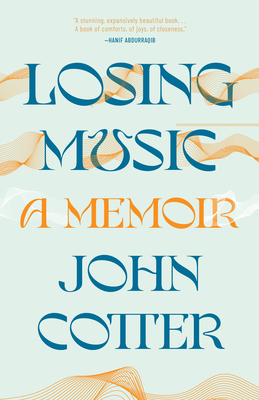 
Coming Soon - Available for Pre-Order Now
"I was in the car the first time music seemed strange: the instruments less distinct, the vocals less crisp."

John Cotter was thirty years old when he first began to notice a ringing in his ears. Soon the ringing became a roar inside his head. Next came partial deafness, then dizziness and vertigo that rendered him unable to walk, work, sleep, or even communicate. At a stage of life when he expected to be emerging fully into adulthood, teaching and writing books, he found himself "crippled and dependent," and in search of care.

When he is first told that his debilitating condition is likely M ni re's Disease, but that there is "no reliable test, no reliable treatment, and no consensus on its cause," Cotter quits teaching, stops writing, and commences upon a series of visits to doctors and treatment centers. What begins as an expedition across the country navigating and battling the limits of the American healthcare system, quickly becomes something else entirely: a journey through hopelessness and adaptation to disability. Along the way, hearing aids become inseparable from his sense of self, as does a growing understanding that the possibilities in his life are narrowing rather than expanding. And with this understanding of his own travails comes reflection on age-old questions around fate, coincidence, and making meaning of inexplicable misfortune.

A devastating memoir that sheds urgent, bracingly honest light on both the taboos surrounding disability and the limits of medical science, Losing Music is refreshingly vulnerable and singularly illuminating--a story that will make readers see their own lives anew.