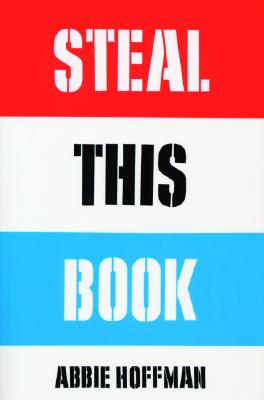 The notorious, radical survival guide to living free as a revolutionary from one of the greatest activists of the 20th century.

In 1970, infamous activist Abbie Hoffman sat in Cook County jail, awaiting what would become known as the Trial of the Chicago Seven. Hoffman and six conspirators were prosecuted by the US government for their part in anti-Vietnam War and counterculture protests outside the 1968 Democratic National Convention. It was in jail that Hoffman would begin to write Steal This Book.

Labelled by publishers as a book that would "end free speech" and causing scandals with its advice on how to get free food, housing, transportation, medical care, and more, as well as how to run a guerrilla movement, Steal This Book is a revolutionary's manual to "survival in the prison that is Amerika." Hoffman criss-crossed the country, ferreting out alternative ways of getting along in America—some illegal, and all radical—using his own decades of experience in living and fighting underground. Split into three sections to Survive! Fight! and Liberate!, Steal This Book captures the spirit of those years, describing actions and techniques that were already in use in all 50 states and sharing them with the masses.

This edition gives you a window into the movements of the sixties and seventies. While many of the holes in the system which Hoffman exposes have since been plugged up, the spirit of revolution, the dedicated to undermining injustice, and the earnestness of activism remain—in this book and in activism today.

Abbie Hoffman (1936-1989) was an American political and social activist, anarchist, and revolutionary who co-founded the Youth International Party ("Yippies"). He was arrested and tried for his role in protests that led to violent confrontations with police during the 1968 Democratic National Convention. Hoffman continued his activism into the 1970s, and remains an icon of the anti-war movement and the counterculture era.