The Plot to Betray America: How Team Trump Embraced Our Enemies, Compromised Our Security and How We Can Fix It (Compact Disc) 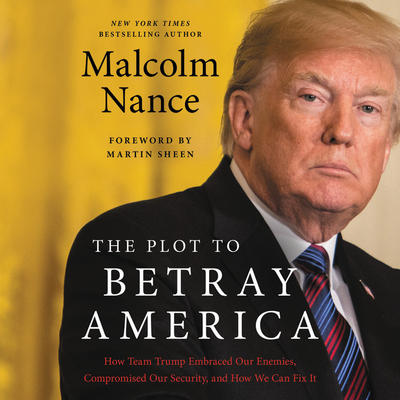 The Plot to Betray America: How Team Trump Embraced Our Enemies, Compromised Our Security and How We Can Fix It (Compact Disc)


Difficult to Find
A searing investigation and spy hunt for the American officials complicit in the Trump-Russia conspiracy and a case for the indictment of Donald Trump. MSNBC counterterrorism analyst and New York Times bestselling author Malcolm Nance was the first person to blow the whistle on Russia's hacking of the 2016 election and to reveal Vladmir Putin's masterplan.Now, in THE PLOT TO COMMIT TREASON, Nance provides a detailed assessment of how Donald Trump lead a cabal of American financial charlatans, political opportunists and power-hungry sycophants to eagerly betray the nation in order to execute a Russian inspired plan to place him, a Kremlin-friendly President in power. It details an evidence-based conspiracy of a ravenously avaricious family leading an administration of political mercenaries who plotted to dismantle 244 years of American democracy and break up the American-led world order since WWII. Seduced by promises of riches dangled in front of them by Putin, the Trump administration has been was caught trying to use all of its political power to stop investigations by US Intelligence and the Special Counsel to conceal the greatest betrayal in American history: The sale of the American presidency to foreign adversaries. THE PLOT TO COMMIT TREASON will unscramble the framework and strategies used by the Republican Party and non-state conspirators, including Rudy Guiliani, Mitch McConnell, Jeff Sessions, and more. Nance's in-depth research and interviews with intelligence experts and insiders illustrate Trump's deep financial ties to Russia through his family's investments, the behaviors of his pro-Moscow associates and the carefully crafted seduction of numerous Americans by Russian intelligence led to work with Vladimir Putin to betray the nation. In what reads like a fast-paced geopolitical spy-thriller, Nance clarifies the spiders web of relationships both personal and financial (including Russia and American based mafia) that lead back to the Kremlin. THE PLOT TO COMMIT TREASON provides a step-by-step blueprint of how and why Trump will be brought to justice.