Stealing Home: Los Angeles, the Dodgers, and the Lives Caught in Between (Paperback) 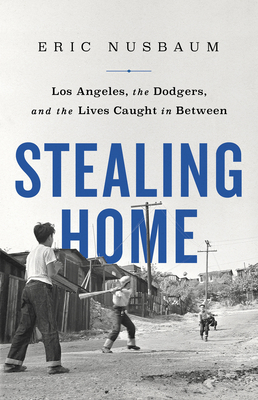 Stealing Home: Los Angeles, the Dodgers, and the Lives Caught in Between (Paperback)


Usually Ships in 1-5 Days
A story about baseball, family, the American Dream, and the fight to turn Los Angeles into a big league city.
Dodger Stadium is an American icon. But the story of how it came to be goes far beyond baseball. The hills that cradle the stadium were once home to three vibrant Mexican American communities. In the early 1950s, those communities were condemned to make way for a utopian public housing project. Then, in a remarkable turn, public housing in the city was defeated amidst a Red Scare conspiracy.
Instead of getting their homes back, the remaining residents saw the city sell their land to Walter O'Malley, the owner of the Brooklyn Dodgers. Now LA would be getting a different sort of utopian fantasy -- a glittering, ultra-modern stadium.
But before Dodger Stadium could be built, the city would have to face down the neighborhood's families -- including one, the Aréchigas, who refused to yield their home. The ensuing confrontation captivated the nation - and the divisive outcome still echoes through Los Angeles today.
Eric Nusbaum is a former sports editor at VICE. In addition to VICE, his work on sports, history, and culture has appeared in ESPN the Magazine, Sports Illustrated, Outside, The Daily Beast, Deadspin, and the Best American Sports Writing anthology. Eric was born and raised in L.A. He has spent many hours both attending games at Dodger Stadium, and sitting in traffic to reach those games. He has also lived and worked in Seattle and Mexico City.

"A well-known tale of racial injustice given a fresh look...Provocative, essential reading."
—Kirkus

"Eric Nusbaum takes several overlooked threads of history and weaves them into a vivid tapestry of twentieth-century America that is at once sprawling and intimate, raw and poignant. Stealing Home is a relevant and important book--and a fantastic read."—Margot Lee Shetterly, New York Times-bestselling author of Hidden Figures

"Stealing Home has a driving plot, a humane heart, and a proud conscience. Read it and enjoy the story, or read it and get mad, or read it and change your mind. Most importantly, read it."—Chuck D, founding member of Public Enemy

"In my family, the Dodgers caused pain and disillusionment when they left Brooklyn. But what happened in Los Angeles is a second drama with its own measure of financial manipulation, political intrigue, and working-class heartache. Stealing Home takes on a whole new meaning in Eric Nusbaum's marvelous book."—David Maraniss, New York Times-bestselling author of When Pride Still Mattered and Clemente

"As a sports book, Stealing Home is astonishingly good-but it's more than just a sports book. The human experience it depicts resonates far beyond Los Angeles. The writing is lean, hard, and urgent. You'll read it quickly and think about it for a long time."—Brian Phillips, New York Times-bestselling author of Impossible Owls

"A story perfectly told, riveting, moving, and deeply human."—Will Leitch, author of Are We Winning? and God Save the Fan