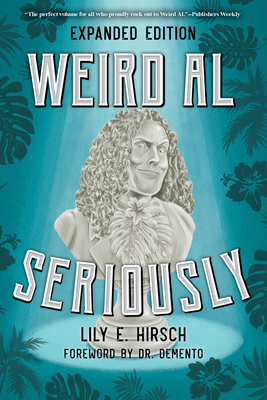 
Usually Ships in 1-5 Days
This Expanded Edition features even more insights on "Weird Al" Yankovic, including his activities during a tumultuous 2020 and 2021, diving deeper into the world of the iconic man who has made a career out of making us laugh. Funny music is often dismissed as light and irrelevant, but Yankovic's fourteen successful studio albums prove there is more going on than comedic music's reputation suggests. Lily Hirsch weaves together original interviews with the prince of parody himself, creating a fresh take on comedy and music's complicated romance. She reveals that Yankovic's jests have always had a deeper meaning, addressing such topics as bullying, celebrity, and racial and gender stereotypes. The Expanded Edition celebrates Yankovic's vast influence on musicians, comedians, and performing artists as well as what the man has meant to fans--in a time of uncertainty, Yankovic has served as a much-needed bright spot for many. From his love of accordions and Hawaiian print shirts to his popular puns and trademark dance moves, Weird Al is undeterred by those who say funny music is nothing but a low-brow pastime. And thank goodness. With his good-guy grace still intact, Yankovic remains unapologetically and unmistakably himself. Reveling in the mischief and wisdom of Yankovic's over forty-year career, this book is an Al-expense-paid tour of a true comedic and musical genius.
Lily E. Hirsch is the author of Weird Al: Seriously. She has written five books on topics ranging from Jewish music's history to music in criminal law. When not teaching or writing as visiting scholar at California State University, Bakersfield, Hirsch blogs at insultingmusic.com. She lives in Bakersfield, California.