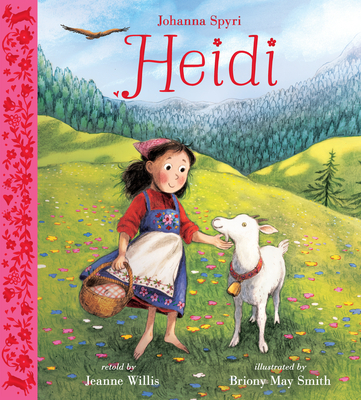 By Johanna Spyri, Briony May Smith (Illustrator)
List Price: $17.99
Our Price: $16.19
(Save: $1.80 10%)
Usually Ships in 1-5 Days
When five-year-old orphan Heidi is sent to live in the Swiss Alps with her grumpy grandfather, the rest of the village takes pity on her. But Heidi soon discovers that hidden behind the scowl, Grandpa Alps is gentle and kind. She loves her new life in the mountains shepherding the goats, gathering flowers, and playing with her best friend, Peter. But then Heidi is forced to move far away to the soot and smoke of Frankfurt to be the companion of a young girl. Will Heidi ever return to Grandpa and her true home in the mountains?
Johanna Spyri was born in Switzerland in 1827. She wrote for both adults and children. Heidi, her most well-known book, was first published in 1880.

Jeanne Willis wrote her first book when she was five. After that, there was no turning back. She has since written more than three hundred books, including I’m in Charge!, Stardust, Never Too Little to Love, and Poles Apart. She has won several awards, which are arranged in the attic where she works, along with her collection of caterpillars, pink-toed tarantula skins, and live locusts. Jeanne Willis lives in London.

Briony May Smith grew up in Sandhurst in Berkshire, England, playing with her younger brother and sister. She now lives in Devon, where her workday mainly consists of drawing fairies, interrupted only when her dog, Finbar, demands his walk. She is the illustrator of Stardust and Tooth Fairy in Training.