If I See You Again Tomorrow (Hardcover) 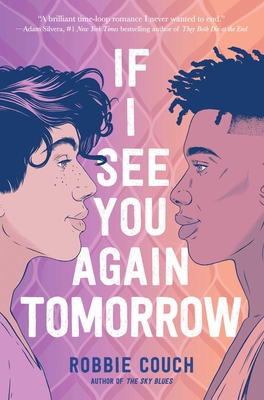 If I See You Again Tomorrow (Hardcover)

By Robbie Couch
List Price: $19.99
Our Price: $17.99
(Save: $2.00 10%)
Coming Soon - Available for Pre-Order Now
From the author of The Sky Blues and Blaine for the Win comes a speculative young adult romance about a teen stuck in a time loop that’s endlessly monotonous until he meets the boy of his dreams.

For some reason, Clark has woken up and relived the same monotonous Monday 309 times. Until Day 310 turns out to be…different. Suddenly, his usual torturous math class is interrupted by an anomaly—a boy he’s never seen before in all his previous Mondays.

When shy, reserved Clark decides to throw caution to the wind and join effusive and effervescent Beau on a series of “errands” across the Windy City, he never imagines that anything will really change, because nothing has in such a long time. And he definitely doesn’t expect to fall this hard or this fast for someone in just one day.

There’s just one problem: how do you build a future with someone if you can never get to tomorrow?
Robbie Couch is a Los Angeles-based writer who spends his time eating noodles, scrolling on his phone, and explaining to confused strangers that his last name is pronounced “like a sofa.” He is the author of The Sky Blues, Blaine for the Win, and If I See You Again Tomorrow. Follow him on Twitter, if you dare: @Robbie_Couch.