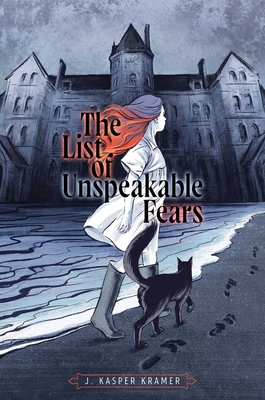 By J. Kasper Kramer
List Price: $17.99
Our Price: $16.19
(Save: $1.80 10%)
Usually Ships in 1-5 Days
The War That Saved My Life meets Coraline in this “deliciously creepy” (Publishers Weekly, starred review) middle grade historical novel following an anxious young girl learning to face her fears—and her ghosts—against the backdrop of the typhoid epidemic.

But soon Essie discovers so much more to fear. Her mother has remarried, and they must move from their dilapidated tenement in the Bronx to North Brother Island, a dreary place in the East River. That’s where Essie’s new stepfather runs a quarantine hospital for the incurable sick, including the infamous Typhoid Mary. Essie knows the island is plagued with tragedy. Years ago, she watched in horror as the ship General Slocum caught fire and sank near its shores, plummeting one thousand women and children to their deaths.

Now, something on the island is haunting Essie. And the red door from her dreams has become a reality, just down the hall from her bedroom in her terrifying new house. Convinced her stepfather is up to no good, Essie investigates. Yet to uncover the truth, she will have to face her own painful history—and what lies behind the red door.
J. Kasper Kramer is the author of the acclaimed novel The Story That Cannot Be Told as well as The List of Unspeakable Fears. She’s an author and English professor in Chattanooga, Tennessee. She has a master’s degree in creative writing and once upon a time lived in Japan, where she taught at an international school. When she’s not curled up with a book, Kramer loves researching lost fairy tales, playing video games, and fostering kittens. Visit her at JKasperKramer.com.

* "Kramer has chosen an innately creepy setting. . .  [and] delivers a thrilling read with poignant commentary on the value of immigrants’ lives and one’s capacity to become a stronger, better person."
— Booklist, Starred Review

* "Intricately and elegantly plotted, and full of vividly rendered details, Kramer’s novel is a deliciously creepy ghost story with a mystery at its core and, given discussions about vaccines and contagion, special resonance for the current historical moment."
— Publishers Weekly, Starred Review

"[A] suspenseful take on conquering fears, with a lesson on how first impressions can be very wrong. . . this is the perfect Halloween read."
— School Library Journal

"Readers who like ghost stories and mysteries will enjoy reading this book. . . Recommended."
— School Library Connection