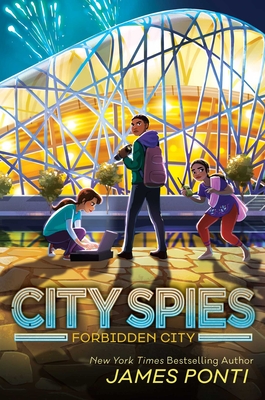 This is book number 3 in the City Spies series.

In this third “thrilling” (Kirkus Reviews) installment in the New York Times bestselling series from Edgar Award winner James Ponti, the young group of spies help a fellow agent in another international adventure perfect for fans of Spy School and Mrs. Smith’s Spy School for Girls.

After taking down a mole within their organization, the City Spies are ready for their next mission—once again using their unique skills and ability to infiltrate places adults can’t. The sinister Umbra has their sights set on recruiting a North Korean nuclear physicist by any means necessary, and the City Spies plan to keep an eye on his son by sending Paris to the chess prodigy’s tournaments in Moscow and Beijing.

Meanwhile, Sydney’s embedded as a junior reporter for a teen lifestyle site as she follows the daughter of a British billionaire on tour with the biggest act on her father’s music label to uncover what links both the band and the billionaire have to a recent threat from an old Soviet missile base.

From a daring break-in at one of London’s most exclusive homes to a dangerous undercover mission to a desperate search and rescue operation on the streets of Beijing, the City Spies have their work cut out for them on their most dangerous mission yet.
James Ponti is the New York Times bestselling author of three middle grade book series: the all-new City Spies, about an unlikely squad of five kids from around the world who form an elite MI6 Spy Team; the Edgar Award–winning Framed! series, about a pair of tweens who solve mysteries in Washington, DC; and the Dead City trilogy, about a secret society that polices the undead living beneath Manhattan. His books have appeared on more than fifteen different state award lists and he is the founder of a writers group known as the Renegades of Middle Grade. James is also an Emmy–nominated television writer and producer who has worked for many networks including Nickelodeon, Disney Channel, PBS, History, and Spike TV, as well as NBC Sports. He lives with his family in Orlando, Florida. Find out more at JamesPonti.com.