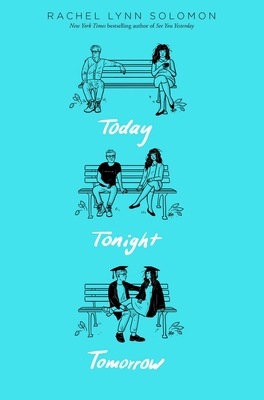 The Hating Game meets Nick and Norah’s Infinite Playlist by way of Morgan Matson in this unforgettable romantic comedy about two rival overachievers whose relationship completely transforms over the course of twenty-four hours.

Today, she hates him.

It’s the last day of senior year. Rowan Roth and Neil McNair have been bitter rivals for all of high school, clashing on test scores, student council elections, and even gym class pull-up contests. While Rowan, who secretly wants to write romance novels, is anxious about the future, she’d love to beat her infuriating nemesis one last time.

Tonight, she puts up with him.

When Neil is named valedictorian, Rowan has only one chance at victory: Howl, a senior class game that takes them all over Seattle, a farewell tour of the city she loves. But after learning a group of seniors is out to get them, she and Neil reluctantly decide to team up until they’re the last players left—and then they’ll destroy each other.

As Rowan spends more time with Neil, she realizes he’s much more than the awkward linguistics nerd she’s sparred with for the past four years. And, perhaps, this boy she claims to despise might actually be the boy of her dreams.

Tomorrow…maybe she’s already fallen for him.
Rachel Lynn Solomon is a bestselling author of love stories for teens and adults, including Today Tonight Tomorrow, See You Yesterday, The Ex Talk, and Weather Girl. Originally from Seattle, she’s currently navigating expat life with her husband in Amsterdam, where she’s on a mission to try as many Dutch sweets as possible. Learn more at RachelSolomonBooks.com.

“A breezy, one-sitting read that wraps the immediacy of a single day with outstanding layers of nostalgia, empowerment and self-acceptance.” —BookPage, starred review

“A thoughtful and current story, and a fun summer read.” —SLJ

“Fun, flirty, and downright adorable.” —Deb Caletti, award-winning author of A Heart in a Body in the World and Girl, Unframed

“In this pitch-perfect romance, it takes only one night for enemies to find love, but Solomon’s wonderful writing and complex characters captivate instantly.” —Emily Wibberley and Austin Siegemund-Broka, authors of Always Never Yours and If I’m Being Honest