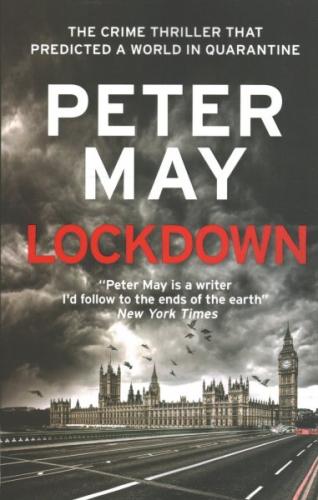 
Backordered
Written over fifteen years ago, this prescient, suspenseful thriller is set against a backdrop of a capital city in quarantine, and explores human experience in the grip of a killer virus.
"They said that twenty-five percent of the population would catch the flu. Between seventy and eight percent of them would die. He had been directly exposed to it, and the odds weren't good."

A CITY IN QUARANTINE

London, the epicenter of a global pandemic, is a city in lockdown. Violence and civil disorder simmer. Martial law has been imposed. No-one is safe from the deadly virus that has already claimed thousands of victims. Health and emergency services are overwhelmed.

At a building site for a temporary hospital, construction workers find a bag containing the rendered bones of a murdered child. A remorseless killer has been unleashed on the city; his mission is to take all measures necessary to prevent the bones from being identified.

D.I. Jack MacNeil, counting down the hours on his final day with the Met, is sent to investigate. His career is in ruins, his marriage over and his own family touched by the virus. Sinister forces are tracking his every move, prepared to kill again to conceal the truth. Which will stop him first - the virus or the killers?

Peter May was born and raised in Scotland. He was an award-winning journalist at the age of twenty-one and a published novelist at twenty-six. When his first book was adapted as a major drama series for the BCC, he quit journalism and during the high-octane fifteen years that followed, became one of Scotland's most successful television dramatists. He created three prime-time drama series, presided over two of the highest-rated serials in his homeland as script editor and producer, and worked on more than 1,000 episodes of ratings-topping drama before deciding to leave television to return to his first love, writing novels.

He has won several literature awards in France, received the USA's Barry Award for The Blackhouse, the first in his internationally bestselling Lewis Trilogy; and in 2014 was awarded the ITV Specsavers Crime Thriller Book Club Best Read of the Year award for Entry Island. Peter now lives in South-West France with his wife, writer Janice Hally.
"One heck of a thriller...feels more immediate than most and certainly deserved to make its way into the world."
—BOLO Books

"What would a crime thriller set in the middle of a devastating pandemic look like? May provides a grim but plausible answer in this superior effort."
—Publishers Weekly

"[Lockdown] is a trip to London with the Grim Reaper as your tour guide...it is unpleasant, harrowing, repulsive and worth every moment spent on it."
—King's River Life Magazine