The Secret Life of a Vet (Paperback) 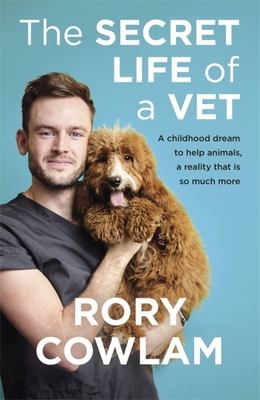 The Secret Life of a Vet (Paperback)

Honest and heart-warming account of the highs and lows of life as a vet, by lovable TV star Rory Cowlam.

Rory Cowlam, otherwise known as Rory the Vet, has had a passion for animals for as long as he can remember. As a young boy, growing up in the countryside, he fell in love with the creatures that could be found both at home and in the neighbouring farms and fields. There was never any doubt in his mind as to what he wanted to do when he grew up.

Now Rory's dreams of becoming a vet are a reality. He works in a busy London practice where his honest and emotional relationships with the animals and their owners have made him the relatable and approachable face of veterinary work. But, as Rory describes here with a mixture of his trademark openness and humour, what he couldn't have known as a small boy with his heart set on becoming the next James Herriot, was what becoming a vet really entails.

In an era when doctors and nurses are talking more openly about the realities of saving human lives, Rory shows what a vital service vets offer in caring for the animals that often form the very heart of the household. He describes the demanding experience of veterinary school, and offers a very human take on what it's like to treat animals, and the little talked about mental health implications that this pressured life or death industry holds.

This is a frank and heart-warming account of chasing a childhood dream and learning to love the reality.

Dr Rory Cowlam, better known as Rory the Vet, is a graduate from the Royal Veterinary College and now a member of the Neighbourhood Vet practice based in south east London. Rory's approach and ethos is centred around education and communication and changing the perception of vets, building a wider knowledge for the general public of the care and health of animals. Rory was nominated for Vet of the Year at the 2018 and 2019 Animal Star Awards and is actively involved with the RSPCA and the Dog's Trust. He is also an ambassador of the charity project Streetvet. A charismatic and much loved personality, Rory presents The Pets Factor on CBBC and has regular guest spots on Blue Peter, BBC Breakfast and Lorraine.