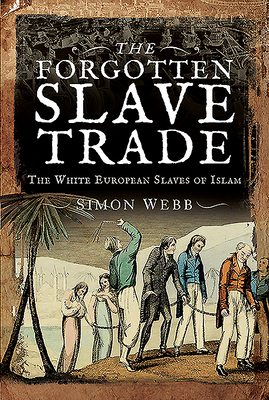 
Difficult to Find
Explains the role of the newly independent United States in putting an end to the trade in European and American slaves.

Everybody knows about the transatlantic slave trade, which saw black Africans snatched from their homes, taken across the Atlantic Ocean and then sold into slavery. However, a century before Britain became involved in this terrible business, whole villages and towns in England, Ireland, Italy, Spain and other European countries were being depopulated by slavers, who transported the men, women and children to Africa where they were sold to the highest bidder. This is the forgotten slave trade; one which saw over a million Christians forced into captivity in the Muslim world.

Starting with the practice of slavery in the ancient world, Simon Webb traces the history of slavery in Europe, showing that the numbers involved were vast and that the victims were often treated far more cruelly than black slaves in America and the Caribbean. Castration, used very occasionally against black slaves taken across the Atlantic, was routinely carried out on an industrial scale on European boys who were exported to Africa and the Middle East. Most people are aware that the English city of Bristol was a major center for the transatlantic slave trade in the eighteenth century, but hardly anyone knows that 1,000 years earlier it had been an important staging-post for the transfer of English slaves to Africa.

Reading this book will forever change how you view the slave trade and show that many commonly held beliefs about this controversial subject are almost wholly inaccurate and mistaken.