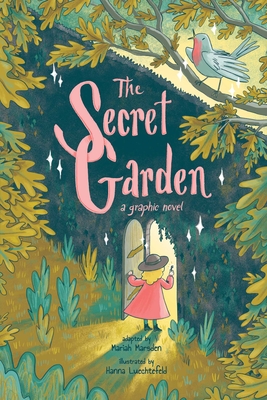 Ten-year-old Mary Lennox arrives at a secluded estate on the Yorkshire moors with a scowl and a chip on her shoulder. First, there’s Martha Sowerby: the too-cheery maid with bothersome questions who seems out of place in the dreary manor. Then there’s the elusive Uncle Craven, Mary’s only remaining family—whom she’s not permitted to see. And finally, there are the mysteries that seem to haunt the run-down place: rumors of a lost garden with a tragic past, and a midnight wail that echoes across the moors at night.

As Mary begins to explore this new world alongside her ragtag companions—a cocky robin redbreast, a sour-faced gardener, and a boy who can talk to animals—she learns that even the loneliest of hearts can grow roots in rocky soil.

Given new life as a graphic novel in illustrator Hanna Luechtefeld's whimsical style, The Secret Garden is more enchanting and relevant than ever before. At the back of the book, readers can learn about the life of Frances Hodgson Burnett and the history of British colonialism that contextualizes the original novel.

Hanna Luechtefeld spent the early part of their childhood in New Hampshire, the later part in Missouri, and all of it in the woods. Long afternoons filled with outdoor adventure gave them a flair for the creative and a love of storytelling. They graduated from the University of Central Missouri in 2019 with degrees in graphic design and illustration and a passion for zines and DIY comics. Today, Hanna lives in Kansas City, where they help run a local art gallery and music venue. When not preparing for a zine fest, you can find them outside: mountain biking, roller blading, or hiking. Someday, they hope to have a backyard “secret garden” of their own.
“A new take on a beloved story that will delight readers young and old.” (School Library Journal)