The Butterfly Effect: Insects and the Making of the Modern World (Hardcover) 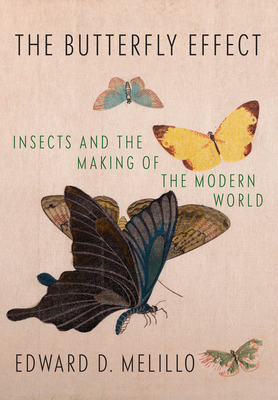 The Butterfly Effect: Insects and the Making of the Modern World (Hardcover)


Usually Ships in 1-5 Days
A fascinating, entertaining dive into the long-standing relationship between humans and insects, revealing the surprising ways we depend on these tiny, six-legged creatures.

Insects might make us shudder in disgust, but they are also responsible for many of the things we take for granted in our daily lives. When we bite into a shiny apple, listen to the resonant notes of a violin, get dressed, receive a dental implant, or get a manicure, we are the beneficiaries of a vast army of insects. Try as we might to replicate their raw material (silk, shellac, and cochineal, for instance), our artificial substitutes have proven subpar at best, and at worst toxic, ensuring our interdependence with the insect world for the foreseeable future.
Drawing on research in laboratory science, agriculture, fashion, and international cuisine, Edward D. Melillo weaves a vibrant world history that illustrates the inextricable and fascinating bonds between humans and insects. Across time, we have not only coexisted with these creatures but have relied on them for, among other things, the key discoveries of modern medical science and the future of the world's food supply. Without insects, entire sectors of global industry would grind to a halt and essential features of modern life would disappear. Here is a beguiling appreciation of the ways in which these creatures have altered--and continue to shape--the very framework of our existence.
EDWARD D. MELILLO is professor of history and environmental studies at Amherst College. He is the author of Strangers on Familiar Soil: Rediscovering the Chile-California Connection (2015), which won the Western History Association's 2016 Caughey Prize for the most distinguished book on the American West. He was awarded the Mellon New Directions Fellowship in 2017. He received his PhD and his MPhil from Yale University and his BA from Swarthmore College. He grew up in Falmouth, Massachusetts, and now lives in South Hadley, Massachusetts.

"Melillo is a witty and eloquent guide through the fraught terrain of human-insect interactions, able to write as lucidly about the white-eyed mutant fruitfly as the four movements of Serenade in A . . . [He] is at his most inspiring, however, when he exalts the scientists who have rejected the view that there’s little in the world of insects to remind us of our own."—Christopher Irmscher, The Wall Street Journal

"Fascinating . . . Stories of intrigue and the breaking of lucrative monopolies mix with natural history to forge an unusual history intertwining human and insect life and full of aha moments."—Nancy Bent, Booklist

“Intriguing and comprehensive. . . Melillo’s fascinating survey makes a persuasive argument that some of the world’s smallest animals are also ‘bottomless reservoirs of possibility.’”—Publishers Weekly

"Melillo introduces many little-known facts and moments of insight, making this an engaging and often surprising read for those interested in environmental history."—Library Journal

"Hard to put down, The Butterfly Effect is a masterful revelation of our interwoven existence with the world of insects and far deeper than most would possibly imagine. Part humanist, historian and scientist, Edward Melillo writes with charm and depth. A must read for anyone with curiosity and interest in how the world works and how seriously our existence is intertwined."—Thomas E. Lovejoy, co-author of Biodiversity and Climate Change

"It's a buzzing, crawling, flapping planet. Edward Melillo, with great affection and respect, reminds us not to forget that we share the planet with an amazing menagerie of remarkable creatures, many of them six-legged. We would be wise to pay more attention!"—Bill McKibben, author Oil and Honey

"In this vividly written volume, Melillo trains a microscope on macrohistory both ancient and modern, showing how a handful of insect species helped to shape our world.  Industrious silkworms, edible crickets, lac bugs, and other useful six-legged critters share the historical stage with merchants, manufacturers, and scientists in a story as entertaining as it is instructive. "—J.R. McNeill, author of Mosquito Empires

"Insects turn up everywhere, including throughout human history. Lively and engrossing, Edward Melillo's The Butterfly Effect shows that bugs matter every bit as much as generals and emperors."—Elizabeth Kolbert, author of The Sixth Extinction

“All of us, all the time, are surrounded by the inconceivable multitudes of the insect world. Yet somehow I was surprised to learn from The Butterfly Effect how deeply these tiny creatures are embedded in human history--and not just because some insects spread disease. In case after enthralling case, Ted Melillo shows how insects have made fortunes, fueled empires, and helped with the creation of great art, all the while making agriculture possible through pollination. Come for the weird orchid bugs that inspired Darwin, stay for the fascinating people who have unraveled the secrets of insect societies!” —Charles C. Mann, author of 1491