The Pirate King: The Incredible Story of the Real Captain Morgan (Paperback) 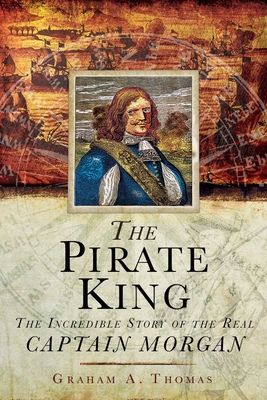 The Pirate King: The Incredible Story of the Real Captain Morgan (Paperback)

The Pirate King is the compelling true story of a Welshman who became one of the most ruthless and brutal buccaneers of the golden age of piracy. The inspiration for dozens of fictionalized pirates in film, television, and literature—as well the namesake of one of the world’s most popular rum brands—Captain Sir Henry Morgan was matchless among pirates and privateers. Unlike most of his contemporaries, he was not hunted down and killed or captured by the authorities. Instead he was considered a hero in England and given a knighthood and eventually was made governor of Jamaica. As Graham Thomas reveals in this fresh biography of this complex and intriguing character, Morgan was an exceptional military leader whose prime motivation was to amass as much wealth as he could by sacking and plundering settlements, towns, and cities up and down the Spanish Main.

Featuring graphic accounts of Morgan’s exploits, eventually leading to an unparalleled rise to power and legitimacy, The Pirate King is a riveting read sure to become a key text in pirate literature. Thomas dispels myths and separates fact from fiction as he presents an intriguing new portrait of one of history’s most compelling figures.

Skyhorse Publishing, along with our Arcade, Good Books, Sports Publishing, and Yucca imprints, is proud to publish a broad range of biographies, autobiographies, and memoirs. Our list includes biographies on well-known historical figures like Benjamin Franklin, Nelson Mandela, and Alexander Graham Bell, as well as villains from history, such as Heinrich Himmler, John Wayne Gacy, and O. J. Simpson. We have also published survivor stories of World War II, memoirs about overcoming adversity, first-hand tales of adventure, and much more. While not every title we publish becomes a New York Times bestseller or a national bestseller, we are committed to books on subjects that are sometimes overlooked and to authors whose work might not otherwise find a home.
Graham A. Thomas is a historian specializing in British naval and maritime history in the seventeenth and eighteenth centuries. He has also written on aerial warfare in the World War II and Korea. He is currently the editor of the British Army Review, a quarterly journal on the doctrine and history of the British Army. His other books include Terror From the Sky: The Battle Against the Flying Bombs, Firestorm: Typhoons Over Caen, Operation Big Ben: Spitfires Dive-bombing V2 sSites, Pirate Hunter: The Life of Captain Woodes Rogers, Pirate Killers: The Royal Navy and the African Pirates, and Captain Kidd: The Hunt for the Truth. He lives in Bath, England.