War Is a Racket: The Antiwar Classic by America's Most Decorated Soldier (Paperback) 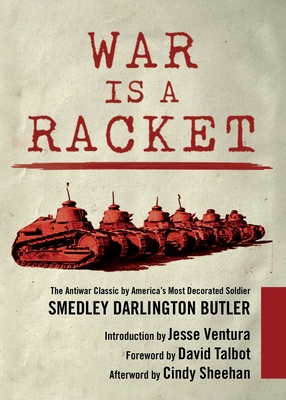 War Is a Racket: The Antiwar Classic by America's Most Decorated Soldier (Paperback)


Usually Ships in 1-5 Days
US Marine Corps Major General Smedley Butler collected an award cabinet full of medals for his battlefield bravery. But perhaps his bravest act of all was to declare, after his retirement in the early 1930s, who was really winning (and losing) during the bloody clashes.

It was business interests, he revealed, who commercially benefited from warfare. War Is a Racket is the title of the influential speech Butler delivered on a tour across the United States, as well the expanded version of the talk that was later published in 1935—and is now reprinted here. This seminal piece of writing rings as true today as it did during Butler’s lifetime.

In his introduction, Jesse Ventura reviews Butler’s original writings and relates them to our current political climate—explaining how right he was, and how wrong our current system is. With an insightful new foreword by Salon.com founder David Talbot, and a new afterword by activist Cindy Sheehan, this portable reference will appeal to anyone interested in the state of our country and the entire world.

Skyhorse Publishing, as well as our Arcade imprint, are proud to publish a broad range of books for readers interested in history--books about World War II, the Third Reich, Hitler and his henchmen, the JFK assassination, conspiracies, the American Civil War, the American Revolution, gladiators, Vikings, ancient Rome, medieval times, the old West, and much more. While not every title we publish becomes a New York Times bestseller or a national bestseller, we are committed to books on subjects that are sometimes overlooked and to authors whose work might not otherwise find a home.
Jesse Ventura is the former independent governor of Minnesota. He is also a former US Navy frogman, a professional wrestler, a movie actor, a visiting fellow at Harvard Kennedy School of Government, and the New York Times bestselling author of seven books, including American Conspiracies, 63 Documents the Government Doesn’t Want You to Read, and Don’t Start the Revolution Without Me! He was the host and executive producer of truTV’s Conspiracy Theory with Jesse Ventura, which won the Stony Award from High Times magazine in 2010. He was also the host of the political talk show Off The Grid, which aired on RT America and online at Ora.tv. He has a reputation as a rebel and a freethinker, and he has no qualms about questioning authority. He spends half the year in Baja, Mexico and the other half in his home state of Minnesota.

David Talbot is the New York Times bestselling author of Brothers: The Hidden History of the Kennedy Years and The Devil’s Chessboard. He is the founder and former editor-in-chief of Salon and has written for the New Yorker, Rolling Stone, and Time. He lives in San Francisco.