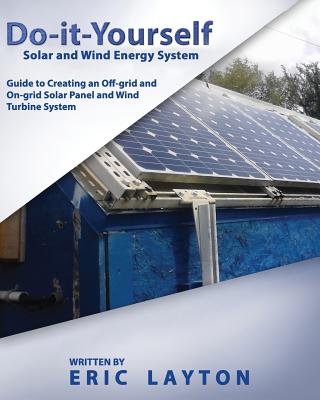 
Usually Ships in 1-5 Days
Eric Layton, an engineer in the solar industry who installs solar panels, wrote this guide for readers that are trying to build their own solar or wind system. Using pictures, this do-it-yourself (DIY) solar and wind system was built with a battery back-up system. His new book is a comprehensive guide on the design, thought process, equipment, and technique on designing this DIY system. Using photographs taken throughout the building process, he covers why he chose certain components in addition to any issues building and installing. This book was written to help fellow solar and wind enthusiasts, as well as inspire those who would like to build their own solar and wind DIY system.
Eric A. Layton received a Mechanical and Aerospace Engineering degree from the University of Florida with an extensive understanding of solar power, bioenergy, and sustainable solutions. Mr. Layton has specific skill sets in designing solar systems, design and engineering of biofuel systems, and nuclear reactor training from the University of Florida. Mr. Layton has a proven ability to use applied research, especially when he designed and built the largest educational solar powered biodiesel facility in the United States in Gainesville, Florida. He was also the lead researcher into using solar power to grow algae in order to produce biodiesel. Mr. Layton grew several algal strains for future algae biodiesel research including construction of a 100% solar powered photobioreactor system while at University of Florida. His current endeavors involve consulting for solar electric as well as solar hot water systems across the United States. Mr. Layton is actively involved with the design, engineering, installation, and monitoring of many solar systems in the United States.