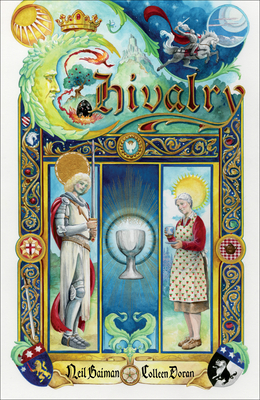 
Usually Ships in 1-5 Days
Another delightfully humorous and sweet fantasy graphic novel adaptation of a Neil Gaiman short story, brought to you by the Eisner award-winning creative team behind Troll Bridge and Snow, Glass, Apples: Neil Gaiman and Colleen Doran!

An elderly British widow buys what turns out to be the Holy Grail from a second-hand shop, setting her off on an epic visit from an ancient knight who lures her with ancient relics in hope for winning the cup.

Neil Gaiman was born in Hampshire, UK, and now lives in the United States near Minneapolis. As a child he discovered his love of books, reading, and stories, devouring the works of C. S. Lewis, J. R. R. Tolkien, James Branch Cabell, Edgar Allan Poe, Michael Moorcock, Ursula K. Le Guin, Gene Wolfe, and G. K. Chesterton. A self-described "feral child who was raised in libraries," Gaiman credits librarians with fostering a lifelong love of reading: "I wouldn't be who I am without libraries. I was the sort of kid who devoured books, and my happiest times as a boy were when I persuaded my parents to drop me off in the local library on their way to work, and I spent the day there. I discovered that librarians actually want to help you: They taught me about interlibrary loans."

Colleen Doran is a cartoonist/illustrator whose recent adaptation of Neil Gaiman's short story "Snow, Glass, Apples" received the Bram Stoker Award for Superior Achievement in a Graphic Novel and the Eisner Award for Best Adaptation from Another Medium. Her work also appeared in Gaiman's "Sandman", and his "American Gods" graphic novel, as well as "The New York Times" bestselling adaptation of his story "Troll Bridge. She did the art for Stan Lee's bestselling graphic novel autobiography "Amazing, Fantastic, Incredible Stan Lee", and she also contributed to "Morrison Hotel", a graphic novel featuring the music and life stories of the legendary rock band The Doors.


Other works include "Mangaman" with Barry Lyga for Houghton Mifflin, a 2012 pick by The American Library Association for Great Graphic novels for Teens: "Gone to Amerikay" with Eisner Award nominated author Derek McCulloch for DC/Vertigo (2012,) picked for Best Adult Books for Teens from the "School Library Journal", and listed in "Best American Comics" 2013: and essayist for the Hugo Nominated "Chicks Dig Comics". She also wrote and drew stories for "The Vampire Diaries" from DC Comics, based on the TV show, and did cover art for "S.H.I.E.L.D" based on the "Marvel: Agents of Shield" TV show, "Wonder Woman" 75th Anniversary special, "Faith" from Valiant, as well as cover art for "The Walking Dead" and art for the Netflix series "Jessica Jones".
Other credits include "Amazing Spiderman", "Lucifer", "Captain America", "The Legion of Superheroes", "The Teen Titans", "Walt Disney's Beauty and the Beast," "Anne Rice's The Master of Rampling Gate," "Clive Barker's Hellraiser", "Clive Barker's Nightbreed", "The Silver Surfer", and many others.


She was Artist in Residence at the Smithsonian Institution, and lectured at The Maryland Institute College of Art and Design, The Australian Society of Authors, and has exhibited and lectured in galleries, museums and exhibits around the world. Books featuring her work have received Eisner Awards, The International Horror Guild Award, and Harvey Awards. She is also a sometime participant in the NASA Social media correspondent project.