Disney The Nightmare Before Christmas: The Story of the Movie in Comics (Hardcover) 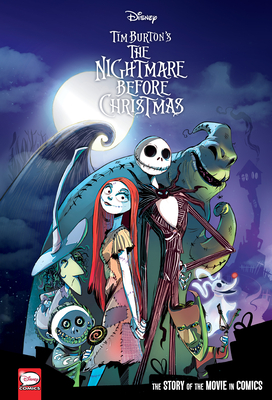 Disney The Nightmare Before Christmas: The Story of the Movie in Comics (Hardcover)

By Alessandro Ferrari, Massimiliano Narciso (Illustrator), KAWAII CREATIVE STUDIO (Illustrator)
List Price: $10.99
Our Price: $9.89
(Save: $1.10 10%)
Prepare for a twisted story of fright and delight in this spooky retelling of the groundbreaking stop-motion film and the tale of Jack Skellington.

Welcome to Halloween Town, where vampires, witches, and goblins rule the never-ending night! One Halloween, something befalls the almighty Pumpkin King. Beyond the tricks and scares, an emptiness begins to grow within Jack Skellington. He finds himself far from home, in a land where people smile, laugh, and sing with glee, and he feels that this Christmas Town could be the answer to his melancholy. Everyone is in for a surprise as Jack tries to unlock the secret of Christmas, take over the holiday, and kidnaps Santa Claus! Meanwhile, Sally, a compassionate rag doll, has a vision--a horrible end is near if Jack succeeds in ruling Christmas. Torn between her love for Jack and saving both towns, she must prevent her vision from coming true. As Jack assumes his role as "Sandy Claws," he discovers where he truly belongs . . . But is it too late?

Join Jack and Sally as two of the biggest holidays collide in an explosion of chills and thrills in this graphic novel retelling in hardcover format!
Alessandro Ferrari is the author of the upcoming graphic novel Disney The Nightmare Before Christmas: The Story of the Movie in Comics.