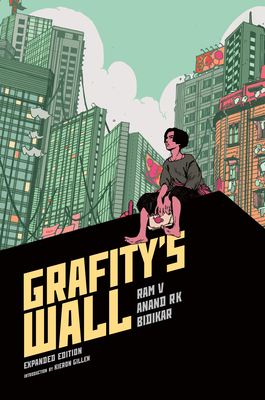 By Ram V, Anand Radhakrishnan (Illustrator), Aditya Bidikar (Illustrator), Jason Wordie (Illustrator), Irma Kniivila (Illustrator)
List Price: $19.99
Our Price: $17.99
(Save: $2.00 10%)
When an aspiring street artist "Grafity" sees the illegal tenements outside his home destroyed, he finds in the debris, a lone, standing wall--one that'll go on to become a summer-long canvas for the lives of four friends getting by and growing up in the constantly changing and challenging environment that is the city of Mumbai.

As Grafity's mural on the wall grows, it chronicles the lives of his friends--Jay, a young man with dreams of being a rapper lured into the dangerous path of a gangster. Chasma, a bright but awkward boy who chronicles his struggles as an outsider trying to belong in this city, by writing letters to strangers, to the city itself. And Saira, who comes to Mumbai with Bollywood dreams but must first survive the reality in this place of gangsters, con-men, friends and lovers.

As the long Mumbai summer comes to a close, hearts are broken and leaps of faith, taken. This coming-of-age tale set in Mumbai's loving, unforgiving and chaotic embrace, is a unique exploration of that entirely universal experience--the falling, soaring, the grave permanence and fleeting transience of our adolescent years.

Listed as the #3 best graphic novel of 2018 by Paste Magazine, enjoy this expanded edition featuring extra content!
Ram V is an award winning author and creator of comics & graphic novels such as Paradiso, These Savage Shores, Grafity's Wall & Ruin of Thieves. His short stories and comics Have appeared in several anthologies. His most recent work includes Batman: Secret Files for DC Comics.