The Soul of the Indian: An Interpretation (Bison Classic Editions) (Paperback) 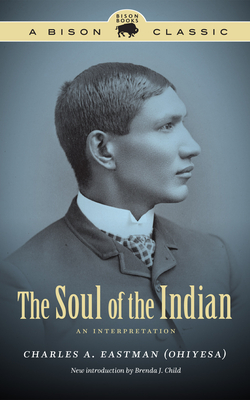 The Soul of the Indian: An Interpretation (Bison Classic Editions) (Paperback)

By Charles A. Eastman, Brenda J. Child (Introduction by)
List Price: $18.95
Our Price: $17.06
(Save: $1.90 10%)
Usually Ships in 1-5 Days
The Soul of the Indian is Charles A. Eastman’s exploration and documentation of religion as he experienced it during the late nineteenth century. A Dakota physician and writer who sought to bring understanding between Native and non-Native Americans, Eastman (1858–1939) became one of the best-known Native Americans of his time and a significant intellectual figure whose clarity of vision endures today.

In a straightforward manner Eastman emphasizes the universal quality and personal appeal of his Dakota religious heritage. First published in 1911, The Soul of the Indian draws on his childhood teaching and ancestral ideals to counter the research written by outsiders who treated the Dakotas’ ancient worldviews chiefly as a matter of curiosity. Eastman writes with deep respect for his ancestors and their culture and history, including a profound reverence for the environment, animals, and plants. Though written more than a century ago, Eastman could be speaking to our own time with its spiritual confusion and environmental degradation. The new introduction by Brenda J. Child grounds this important book in contemporary studies.

Charles Alexander Eastman (Ohiyesa) (1858–1939) was a Dakota physician and writer. When as a young child his life was upended by the Dakota War of 1862, Eastman fled from the Dakota homelands in Minnesota to Canada under the protection of his grandmother and uncle. There he was schooled in indigenous lifeways until the age of fifteen, when his father took him back to his homestead in present-day South Dakota. Eastman received a bachelor of science degree from Dartmouth in 1887 and a medical degree from Boston University three years later. His first appointment as a physician was at the Pine Ridge Agency, where he cared for the Lakota victims of the Wounded Knee Massacre. In addition to two autobiographical works, Indian Boyhood (Nebraska, 1991) and From the Deep Woods to Civilization (Nebraska, 1977), Eastman wrote nine other books, some in collaboration with his wife, Elaine Goodale Eastman. Brenda J. Child (Red Lake Ojibwe) is Northrop Professor of American Studies at the University of Minnesota. She is the author of several books on Native American history, including Boarding School Seasons: American Indian Families, 1900–1940 (Nebraska, 2000).

"This volume has withstood the test of time. . . . Eastman provides insight on every page and much of his focus is on the religious practices and beliefs of the Native Americans."—Roundup

“Like his Dakota ancestors, Eastman was a thinker and a diplomat. He offered up this book and others as a warriors’ feast, even as he could have dissolved into rage and silence. Instead, he chose paper and pen. The Soul of the Indian concludes with a complex interpretation of Dakota and Ojibwe people, possibly more than Americans were prepared to understand at the time of its publication. Eastman wrote in a deceptively simple hand, with a subtle plea for justice for American Indians. He concludes with a beautiful story of goodwill and peace, the moral subtext of The Soul of the Indian. As Eastman exhorted his readers, American Indians held ‘a unique character among the peoples of the earth’ so that when Americans reflect on Indians, ‘let that remembrance be just.’ This was his warriors’ feast.”—from Brenda Child’s introduction