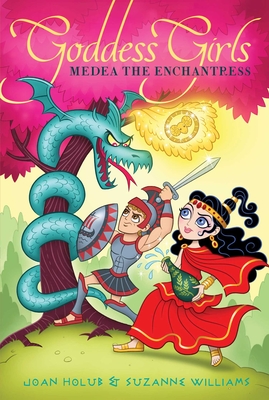 This is book number 23 in the Goddess Girls series.

Princess Medea and a boy named Jason go on a quest for the Golden Fleece in this twenty-third Goddess Girls adventure!

Jason and Princess Medea are on a quest for the golden fleece, a symbol of kingship, that’s hanging from a limb of the great oak tree. But a huge sleeping serpent guards the fleece—and is the one (scary!) barrier for Jason and Medea. With the help of a special sleeping potion Medea creates, can Medea and Jason work their magic and take what is rightfully theirs?
Joan Holub has authored and/or illustrated over 140 children’s books, including the Goddess Girls series, the Heroes in Training series, the New York Times bestselling picture book Mighty Dads (illustrated by James Dean), and Little Red Writing (illustrated by Melissa Sweet). She lives in North Carolina and is online at JoanHolub.com.