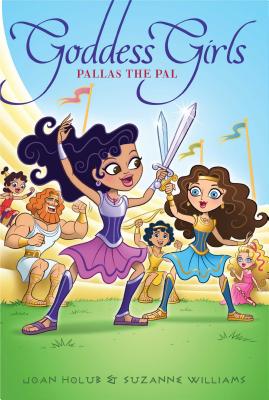 This is book number 21 in the Goddess Girls series.

Pallas, the daughter of Triton and messenger of the sea, enrolls at Mount Olympus Academy in this twenty-first Goddess Girls adventure!

Mortal girl Pallas can’t wait to go show off her swordplay skills at Mount Olympus Academy. As a member of the Cheer Blades, she is hoping to impress her childhood friend, Athena—until she learns Athena has a new group of BFFs in the Goddess Girls. Pallas hopes she can win Athena’s attention at the upcoming Greek Festival battle reenactment competition—and help Pallas prove she is just as good as any boy her age! But Athena is having her own jealousy issues, thanks to her new baby sister. Can these old BFFs work together to help each other out?
Joan Holub has authored and/or illustrated over 140 children’s books, including the Goddess Girls series, the Heroes in Training series, the New York Times bestselling picture book Mighty Dads (illustrated by James Dean), and Little Red Writing (illustrated by Melissa Sweet). She lives in North Carolina and is online at JoanHolub.com.