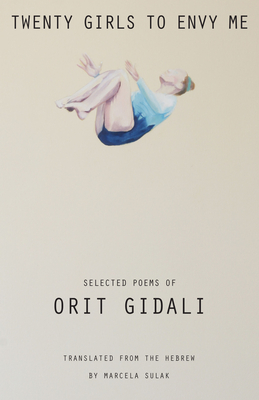 This English-Hebrew book features three dozen poems by the extraordinary Israeli writer Orit Gidali (b. 1974), a unique voice among her contemporaries. Gidali’s work appears to focus on the domestic, but for her, the domestic sphere is the stage on which the drama of the geopolitical is reworked on an individual scale. The domestic is always inhabited by the Other, who in these deeply personal poems appears in various guises: a Palestinian mother, biblical figures, the poet’s own deceased mother, and her husband’s first wife. Gidali creates a space in her world to imaginatively reconfigure the current political impasses of the region through a focus on relationship and openness.

Gidali’s poems, beautifully captured in English by Marcela Sulak, present a world beset by danger and uncertainty, yet they nonetheless cry out for community, connection, cooperation, and coexistence.

Orit Gidali has published three collections of poetry, as well as a children’s book. She teaches at Tel Aviv University and organizes workshops in collaboration with the author Eshkol Nevo.

Marcela Sulak, the author of three collections of poetry and three previous book-length translations, directs the Shaindy Rudoff Graduate Program in Creative Writing at Bar Ilan University, where she is an associate professor of English.
Israeli poet Orit Gidali explores politics, religion and community in Twenty Girls to Envy Me . . . [Her] poems offer timely criticism . . . without being scathing, leaving readers with a prevailing sense of hope. Orit Gidali reveals the many ways in which people connect and matter.
— Shelf Awareness

Like the women who came before her, Orit Gidali’s themes are distinct from those of Israel’s male writers. At 42, she is among the top-selling poets in Israel, and the window she opens onto women’s life is rarely glimpsed in Israeli literature. . . . Sulak rises to the translator’s challenge of preserving the poem’s underlying core. By conveying the freshness, spirit and musicality of the originals, she makes Gidali’s poems sing. These are necessary poems, universal in their call for honesty and compassion. . . . We are fortunate indeed to have these poems—both in Hebrew and English—singing in unison.
— Moment Magazine