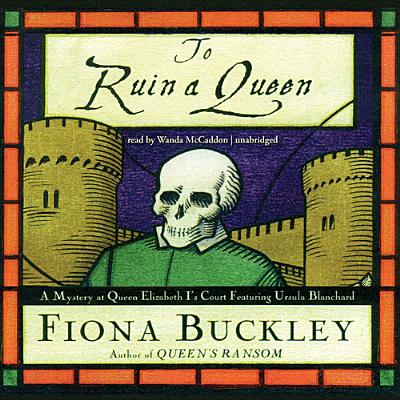 This is book number 4 in the Ursula Blanchard Mysteries series.

As the thrilling adventures continue for Ursula Blanchard, secret agent for Queen Elizabeth I, she finds herself in France, reunited with her husband, Matthew de la Roche, in a passionate but flawed relationship. But when Ursula learns that her daughter, Meg, has mysteriously disappeared, she immediately sets out on a frantic and dangerous search. The trail leads back to England, to Vetch Castle, a grim, haunted keep owned by the enigmatic Philip Mortimer. Soon Ursula forms an alliance with Mortimer's aging but beautiful mother and finds herself investigating a murder and an elaborate plot that could overthrow the queen's throne. With surprises on every page and a high-suspense setting, To Ruin a Queen is the best yet from an author whose series continues to gain momentum--and whose heroine becomes more beguiling with each new tale.