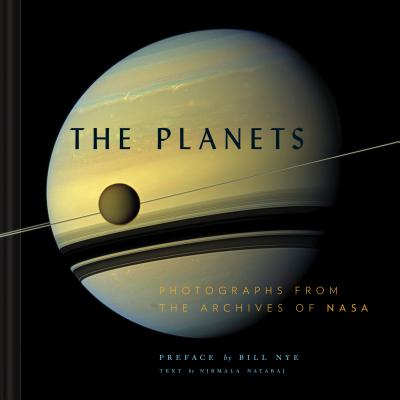 By Nirmala Nataraj, Bill Nye (Preface by), NASA (Photographs by)


Usually Ships in 1-5 Days
This magnificent volume offers a rich visual tour of the planets in our solar system. More than 200 breathtaking photographs from the archives of NASA are paired with extended captions detailing the science behind some of our cosmic neighborhood's most extraordinary phenomena. Images of newly discovered areas of Jupiter, fiery volcanoes on Venus, and many more reveal the astronomical marvels of space in engrossing detail. Anyone with an interest in science, astronomy, and the mysteries of the universe will delight in this awe-inspiring guide to the wonders of the solar system.
Nirmala Nataraj is a New York–based writer and the author of Earth and Space.

Bill Nye is a scientist, engineer, inventor, and performer best known as Bill Nye the Science Guy. He lives in Los Angeles.

“Breathtaking pictures show the otherworldly magic of the solar system in The Planets, a heavy and handsome book made up of stunning photographs from the archives of NASA, each with a substantial caption by science writer Nirmala Nataraj. The images are at once humbling and uplifting: Here in the black void of space is Saturn’s frozen moon, Mimas, white and pitted like a galactic golf ball; here is the tiny golden orb called Io, casting a shadow in a perfect inky circle on the marbled surface of Jupiter; here is the great sun, flames spurting from its surface like plumes.” —Wall Street Journal

“Narrated by award-winning author Nirmala Nataraj and including a foreword by scientist Bill Nye, this extraordinary journey of the solar system consists of more than 200 photographs from the archives of NASA and images of all eight planets and other major objects in the solar system, including the sun, asteroids, comets, and dwarf planets. Their clarity reveals such features as lava flows on Venus, the canyons of Mars, ice on Jupiter’s moon Europa, and the mountain ranges of Pluto.” —Library Journal

“As you turn through the pages, you’re hit with true moments of awe, photos that remind you the power of nature extends beyond our own planet.” —Houston Chronicle

“Nirmala Nataraj returns with another gorgeous photographic tour of space, this time featuring 200 sharp photos of planets, moons, and comets in our solar system, collected from over 40 years’ worth of material housed in NASA’s archives…. The collection is a remarkable reminder of how much has been learned about the planets over the past few decades, solving many mysteries yet introducing many more.” —Publishers Weekly